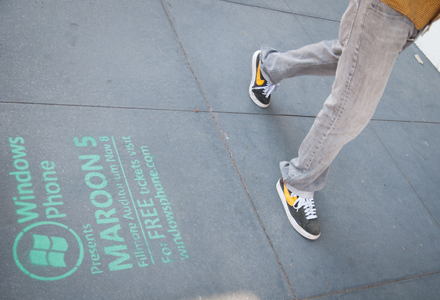 Who can forget Cartoon Network’s 2007 “Aqua Teen Hunger Force” guerrilla marketing stunt that triggered a bomb scare and cost the brand and its handling agency $2 million paid to Boston-area authorities? (Ouch!) Or, last year at the World Cup in South Africa when during the Netherlands vs. Denmark match, two Dutch women were arrested for allegedly violating trademark laws after a group of 36 women turned up at the game wearing short dresses in Bavaria beer’s signature orange color. (The problem: the official beer sponsor of the tournament was Anheuser-Busch.) Although Bavaria and FIFA reached a settlement agreement, in four years when the World Cup returns, Bavaria might again be tempted to test FIFA’s limits in exchange for huge headlines. Will the risk be worth the reward? And with the exception of some dramatic cases, like Cartoon Network’s, is any press good press?

GoGorilla Media’s ceo, Alan Wolan, whose agency was recently mentioned in a Wall Street Journal article about cities cracking down on corporate marketers who graffiti their logos on public property, says his philosophy is, “I always ask myself if we’re hurting anybody in the world with what we’re doing. If the answer is no, then I feel good about it.” GoGorilla was one of the agencies that handled the chalk art activation promoting Microsoft-sponsored concerts in San Francisco as part of its Windows Phone 7 launch. On Nov. 10, Microsoft received a “cease and desist” letter from San Francisco’s public works department, which complained that it takes taxpayer money to clean up graffiti vandalism. A Microsoft spokesperson shot back that the chalk designs were temporary and had all been removed.

According to Natasha Fogel, executive vp in charge of measurement analytics at Strategy One, a division of agency Edelman, cases like these can actually work in a company’s favor. “In Microsoft’s case, it’s a double opportunity,” she says. “The company could volunteer to be part of a cleanup initiative. It seems like another way to rally around the community, but it’s important to understand more about that community first to try and do something that is meaningful to them.” For example, Fogel says a brand could reach out to kids who need community hours at a local high school and then at night throw a Kinect party for the neighborhood. The key is to remember that whatever stunt you decide to pull shouldn’t alienate your core stakeholder group or create victims. She suggests doing a landscape analysis before activating a stunt. This generally requires surveying the locals via phone or online.

Fogel says the Cartoon Network and Bavaria beer (Anheuser-Busch InBev is an Edelman client) debacles are perfect examples of what can go wrong when a landscape analysis isn’t done beforehand. “Assuming that consumers in the Boston-area suburbs were the best target audience for Cartoon Network’s campaign, a landscape analysis would have uncovered potential opportunities for the company and avoided the bad press that was associated with it,” says Fogel. “I’m always telling my clients to go back to the business requirements and make sure they understand all of their targeted audiences.”

In some cases, a well-targeted stunt can have mixed results, like last spring when Epic Games mailed packaged raw meat stuffed with hair, teeth and nails to video game journalists and bloggers at video game enthusiast outlets to promote the release of its game Bulletstorm. Some people loved it and some hated it. “This is a good example of risk tolerance, because some brands have a higher risk tolerance. They can be edgy, their stakeholder groups are going to expect that,” says Fogel. “If it aligns with the key stakeholders that a brand is trying to attract and the campaign objectives, then there may be research that shows that getting this type of awareness prompts people to try or refer a brand. Then it certainly warrants testing it out.”

Even with a solid research strategy in place, some stunts are most effective when they push the boundaries and bend the rules. And most guerrilla marketers would still rather beg for forgiveness than ask permission. Wolan claims the reason is that going to the city first often results in getting caught up in its red tape and bureaucracy. “It’s not like there’s some amorphous body called ‘the city,’” he says. “It’s generally one or two people at a position of power whose feathers got ruffled because you didn’t ask. But as long as it’s a victimless crime where you could eliminate the damage relatively easily you just negotiate the settlement and you move on.”

And that’s why he’s the agency’s chief executive optimist.   EM