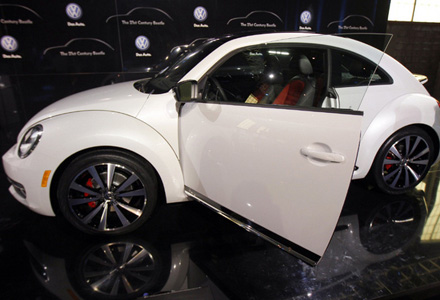 The April 18 press reveal in New York City for the 2012 Beetle captured the essence of the newly redesigned car via dramatic video projections that brought to life the vehicle’s Super Bowl ad and created an immersive experience for the 260 industry writers and lifestyle media in attendance.

Two museum-like video wall displays that resembled giant terrariums dominated the raw warehouse space where the event took place, recreating the forest and the insect life of the Super Bowl ad and surrounding the attendees in a 360-degree video environment. Immediately before the reveal, the ad, in which a beetle runs through a forest, played on one of the screens. But in a dynamic twist for the live event, the beetle shown in the spot skidded to a stop and shattered the video wall, bringing it down in a dramatic crash to reveal the actual car, which was still under covers and projection mapped to look like the insect. The car began to glow and crack and as its old shell burst forth, the car was revealed.

“Our goal was to plan a global unveiling worthy of such an iconic vehicle as the Beetle,” said Mya Walters, manager-brand communications at Volkswagen Group of America. “Beginning with our well-received Super Bowl spot then translating it to a live audience for the debut, we were able to communicate the more masculine, performance-driven attributes of the 21st Century Beetle.” Agency: Jack Morton, New York City.