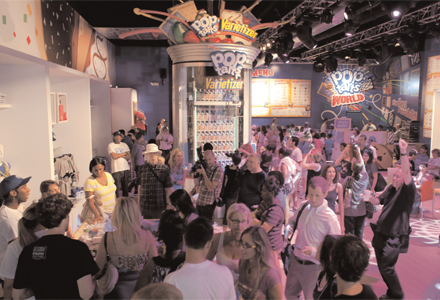 Pop-Tarts Pop Up in Retail

When Pop-Tarts set up a Facebook fan page last summer, it was flooded with more than two million consumers interested in talking about its toaster pastries. The online chatter, which included new flavor combination suggestions, inspired the Kellogg’s-owned brand to bring the excitement to life in a pop-up store. The result? The 3,000-square-foot Pop-Tarts World on 42nd Street in New York City (more on all the sweet details in a moment).

What goes into making a killer pop-up program? We asked Manchester, NH-based handling agency Gigunda Group to show us the roadmap. We also asked Kellogg’s for its Pop-Tarts recipe, but they declined to comment. Guess we’ll focus on the pop-up instead. Allow us to break it down:

Mixing the Right Ingredients
Every program is different, but typically in phase one, agency and client zero in on program objectives, metrics, key targets and locations. It sounds straightforward, but it’s one of the hardest parts, because there are always differences of opinion on what the program should accomplish.

In phase two, the creative and initial budgets are hammered out, including a profit and loss statement if there is a retail component (in Pop-Tarts’ case there is). This phase takes the longest as major decisions are made, like finding appropriate location options. Pop-Tarts narrowed it down to four cities, until the brand settled on New York City. “Times Square has historically been the epicenter of one-of-a-kind brand and consumer experiences, and so it was a perfect location choice for a Pop-Tarts experience,” says Scott Sundheim, associate director-Pop-Tarts brand marketing, who cites primary targets as moms and teens. “The Pop-Tarts brand has always stood for fun, so it was a natural choice to have the brand open Kellogg’s first-ever experiential retail store.”

In the third phase, it’s a matter of locking down the lease and getting construction plans approved before bringing the concept to reality. There was a 16-month development period before Pop-Tarts World opened on Aug. 10.

Following the Recipe
One of the biggest challenges when building a pop-up is the location, because most landlords don’t want to sign six-month leases. Gigunda starts by negotiating with its first-choice location first, but has concurrent talks with other landlords in case it falls through. The design team has three or four different schematic floor layouts ready to go, as well. There are construction permits to obtain, and union contracts to uphold, so to sort it all out the agency usually pays a visit to the mayor’s office to start off on the right foot.

“Permits depend on what the offering is,” says Scott Schoessel, the agency’s coo. “Pop-Tarts World has a working café so there was a whole different set of permits needed for it than, say, something like a Charmin Restroom [the agency’s well-known Times Square pop-up].”

In pop-ups of this caliber, there could very well be 20 people working on-site at any given moment. There are electricians, plumbers and general contractors, so it’s important to know the codes for each line of work. With the end in mind, Gigunda builds each section as modular as possible, so it comes apart neatly during tear down and the company can reuse the pieces later. (There are no non-working dollars up in here, people.)

Creating a Tasty Experience
In the end it’s all about the experience. At Pop-Tarts World the common thread is customization, starting with a 16-foot build-your-own Pop-Tart vending machine called The Varietizer where consumers can pick up to six Pop-Tarts flavors served up in a suction cup. There’s also a café with offbeat menu options like Pop-Tarts Sushi (minced flavors rolled up in a fruit wrap). Consumers can also get a custom-designed t-shirt featuring images by pop artist Burton Morris. Every hour, consumers are surprised with a light show that brings to mind the brand’s signature frosting. There are plenty of computers on site, as well to share the experience.

Pop-Tarts World is open through December, so don’t just get your tinkle on at the Charmin Restrooms when visiting Times Square this holiday season—get your frosting on, too.  EM