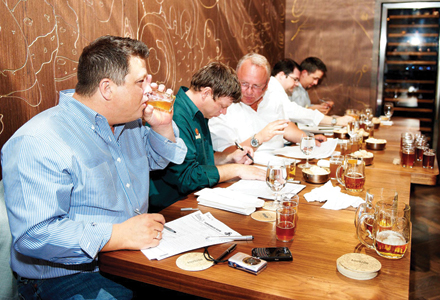 Today’s DIY generation can be a fickle mistress when it comes to making connections with mainstream brands. This is a demographic, after all, that would much prefer to invent, craft and create their own products and experiences than subscribe to popular culture. So rather than fight the tide and push its product on this growing demographic, beer-maker Pilsner Urquell this summer decided to set the stage for an event where amateur and home brewers could compete to make their own unique take on a Czech-style pilsner and vie for the title of Master Home Brewer.

The Pilsner Urquell Master Home Brewer Competition (Handled by RF Binder, New York City) launched online in Chicago, New York City and Washington D.C. and invited home brewers to enter via email. It was first-come-first served to get in, so once the 50 slots per market were full, the brewing began. Each competitor had to arrive on event day—Aug. 8 in New York City, Aug. 10 in Washington D.C. and Aug. 12 in Chicago—with his or her attempt at an authentic pilsner in Urquell’s trademark style. Not an easy feat, as it is one of the hardest styles to perfect, especially in a home brew environment (versus a professional brewery) and during one of the hottest months in recent record.

“Beer is such a cluttered category, we needed to tell the story of our brand in a different way,” says Herb Heneman, brand director at Pilsner Urquell. “This contest allowed us to engage with people who we know pilsner matters to. As a brand we’re always looking for credible ways to talk to our consumers.”

The challenge for the brewers, who got no tips or recipes, was a little like giving a mechanic a toolbox and a junkyard and asking him to build a Shelby Cobra Mustang, Heneman says. In other words, just difficult enough to pique the interest of the craftsman and prove that the brand was serious about finding a Master Home Brewer.

And the contestants were serious about it, too. In fact, several elected not to bring their brews on event day, because they decided they weren’t good enough to compete. Now that’s dedication.

Each event day was an extended tasting by expert judges and the brand’s own brew master, Vaclav Berka. In the end, Philip Jensen of Pennsylvania in the New York Market, Aaron Hermes of Virginia in the Washington D.C. market and Jeff Lewis of Hilliard, Ohio in Philadelphia each won a trip for two to Plzen in the Czech Republic, home of the world’s first pilsner, this fall to tour the brewery and attend the International Master Bartender Competition in Prague.

“It was inspiring how good the brews were,” Heneman says. “We wanted to plant a seed and break through the clutter to speak with this group of consumers and join the conversation about craft. And the proof is in all the buzz online and in the home brew blogs. We’re breaking through.”