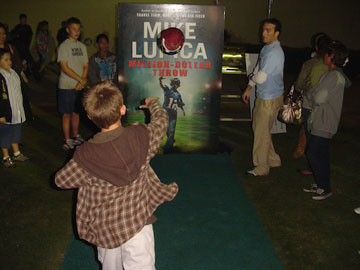 As part of a strategy to engage readers Penguin Young Readers last month sponsored hands-on events at bookstores in six cities in which author Mike Lupica discussed his book Million-Dollar Throw and attendees competed in special ball toss challenges based on the book’s title scene.

In Lupica’s novel Nate Brodie the best quarterback and football player in the eighth grade has a chance to throw a pass through a target at a New England Patriots game to win a $1 million prize. In real life kids ages eight to 15 attending Million Dollar Throw challenges at the bookstores got to throw a football through a hole in a six-foot branded target stand that featured cover art from the book. Those who tossed the ball through the target hole were entered into a lottery to win a $1 000 prize.

The campaign kicked off on Nov. 6 on the set of the “Today Show” as two kids representing literary charities threw a ball through a target then moved on to bookstores in Acton MA; West Chester PA; Fairfax VA; Plano TX; Denver CO and Irvine CA. Stores were chosen in places with local professional football teams and large sports fan bases. Author Lupica gave a presentation at each event signed copies of the book and presented the winner with an oversized prize check.

“The objective was to bring the fans out and make them feel like they were a part of the book and add an interactive element to Mike Lupica’s story ” Shanta Newlin director-publicity at Penguin Young Readers Group told Buzz. “It was an opportunity to not only get Mike into the stores but do a bit more than a traditional book-signing.” Agencies: Goodman Media Michael Alan Group both of New York City.