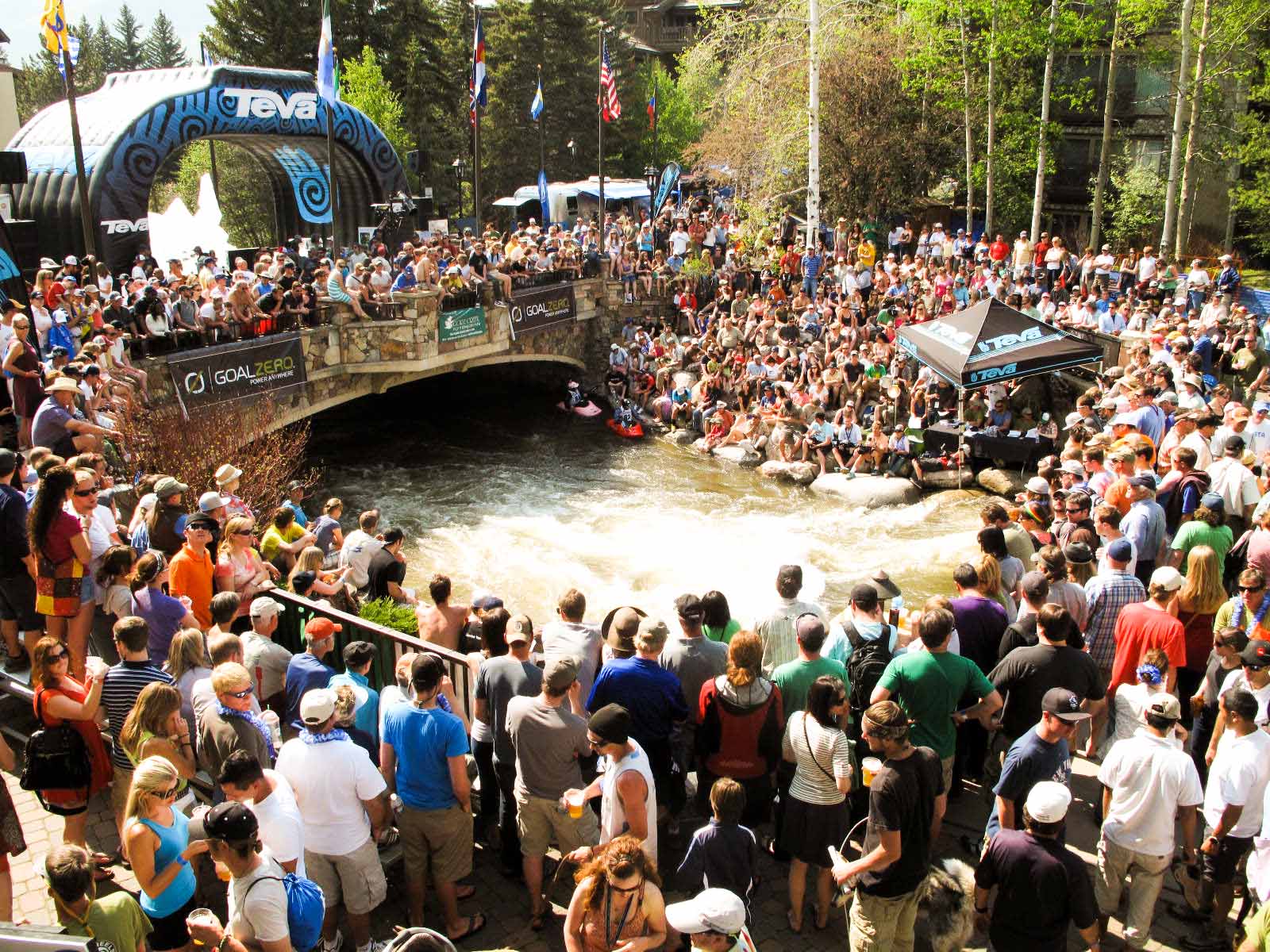 Many brands rely on their biggest sponsorship properties as once-a-year platforms for launching new products making big announcements and getting face time with customers. But few take full advantage of all the ways a title sponsorship can carry their brand’s momentum throughout the rest of the year. This June outdoor footwear company Teva for the eighth time sponsored the Mountain Games an annual sporting event held in Vail CO where kayakers mountain bikers trail runners rock climbers and anglers all come together to compete in the great outdoors.

The Mountain Games are not a proprietary event owned by Teva but the eight-year partnership between brand and sports property has helped Teva develop a platform that reaches beyond an annual product showcase and into domestic and international publicity objectives athlete sponsorship development product line research and cost-effective ad campaign creation. EM traveled to the Colorado Rockies to get a closer look at how Teva built and leveraged its annual title sponsorship to tackle a mountain of marketing goals.

Communicating the brand’s unique name (it means “nature” in Hebrew) is just one of Teva’s marketing challenges. Taking on big guns and newcomers to the outdoor footwear space like Nike and Keen evolving the 25-year-old company from its roots as a whitewater sandal-maker to full-fledged lifestyle brand and meeting the needs of long-time customers while attracting new markets are just a few of the others.

Adam Druckman global sports marketing manager at Teva started working for the brand 15 years ago bringing branded banners and products to trail running climbing kayaking and mountain biking events all over the country. “I was really tiring of that pace and each one of those little events just serving 100 to 1 500 people,” says Druckman.

Mountain sports like biking kayaking and trail running traditionally take place at small separate competitions where the geography often forces spectators to miss a lot of the action. “It always surprised me that we were all trying to put on our own niche sport events,” Druckman says. “I knew we’d be a lot stronger and attract more people and more athletes if we put all those sports together in one event.” At the new Mountain Games more than 10 different extreme mountain sports were given a chance to be in the spotlight in a single venue that offered spectators easy access to every competition.

The partnership between Teva and Untraditional Marketing which owns the games has helped to shape an event that’s grown from 1 000 spectators and 300 athletes to 35 000 spectators and 2 500 athletes. Druckman says despite its size the Teva Mountain Games today are still more cost-effective than the busy event schedule he used to keep. The event uses less than 10 percent of the brand’s entire marketing spend. “What we tried to do was create a sense of mecca for the industry,” Druckman says. “If you consider yourself an athlete or competitor you have to be at the Games.”

While world-class athletes competing are the main draw the Mountain Games are also designed to be inclusive and not elite. “It’s pro-am so you can be an amateur and be able to start on the same starting line as your hero bike rider or kayaker,” Druckman says. “People really like that.”

For the pros attractive cash prizes world-class events (this June the Games became the first U.S. venue in 35 years to host world cup climbing) and after-hours experiences including concerts film festivals and photography exhibitions are all rolled into the Mountain Games to keep the target audience—hard-core competitors—happy and wanting to come back year after year. “Ninety-eight percent of the event’s investment goes into two percent of attendees—the athletes,” Druckman says. “If they think it’s lame it’s the beginning of the end.”

Druckman says the sales strategy is the same as the event strategy: Keep the core performance user happy and the casual lifestyle user will follow. “Aim toward performance—that is our mantra,” he says. “You can always find somebody who’s willing to consider additional performance but you can never find somebody who wants performance that will consider less.”

To show off its shoes in a way that was relevant to pros and amateurs alike Teva split up hands-on product areas into four zones. Consumers could check out kayak shoes just a few feet from the river where the action happens. Or try on casual flip-flops in the kick back-style Mountain Lounge.

International markets are a major focus for Teva so this year the brand invited its worldwide distributors to send their sponsored athletes and local media representatives to the Games. Thirty-five countries were represented. “We’re really determined to make sure our distributors worldwide feel the excitement and energy of this event,” Druckman says. Both domestic and international media were treated to a four-day media camp which included the opportunity to compete in any of the events for free.

Getting More Bang for the Buck.

Teva used the  Games as a backdrop for its 2009 spring print and TV ad campaigns. Druckman says that the strategy not only saves costs on travel and production (all its sponsored athletes are already on site) it produces more effective creative. “A standalone athlete shot can be inspirational but when it’s an athlete surrounded by the crowd it has greater potency to it,” Druckman says.

Teva flies in its entire design team to the Games to meet with its athletes gather feedback on the performance of the shoes and watch the products in action. “The Games have put pressure on our designers to start considering how we are going to support a performance angle on all these different sports,” Druckman says.

The bulk of Teva’s sponsored athletes are trail runners and kayakers but now the brand is considering adding climbers and mountain bikers to the team. “Not just to get them on the podium but to show that we’re an outdoor performance brand with a willingness to support all of these niches ” Druckman says. “An event that we established has started to influence not only our footwear product but our athlete choices.”

To save resources Teva dropped its hang tags reduced its tissue paper inserts uses recycled cardboard for boxes and ships its flip-flops in corn starch-based biodegradable bags. With less in-box literature to explain the shoe’s benefits the Games serve as a platform to help Teva  convey its commitment to the environment.
“That’s where magic starts to happen,” Druckman says. “Attendees start to see there are people working hard to make earth-friendly packaging make a better performance kayak shoe a better cushioned trail running shoe. If you have a chance to meet some of them and see that this whole lifestyle is being supported and financed by this brand that’s when something special starts to happen.”