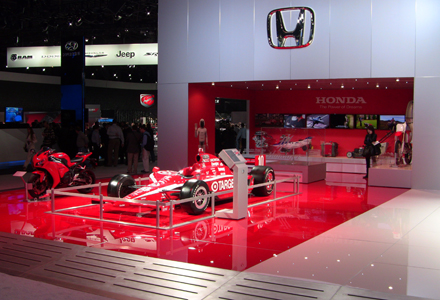 The New York International Auto Show (NYIAS) returned to Manhattan’s Jacob Javits Convention Center April 6 to 15 with the latest cutting-edge concept cars and road-ready models for 2012. The trend the last few years has been to stand out with technology-heavy interactions, but that wasn’t the case this time around. This year, GM, Lincoln, Toyota and the rest went back to beautiful booth designs to highlight the cars, rather than deploying flashy gadgets that sometimes steal focus from the products. EM put down rubber all over Javits, so read on to find out more. Also, visit our photo gallery for the full picture.

Ford’s Lincoln is in the midst of a re-branding effort designed to make it a more hip, suburban luxury badge and less grandma’s Sunday driver. To help communicate that to consumers, the brand rolled out a brand-new footprint, distinct and separate from Ford’s main space. The focus was on the design, both in the exhibit space and in the new flagship vehicle, the MKZ. The booth was softly lit with earthy colors, and encased in a throwback 60s-style, mod-like, hexagonal fenced wall. It was luxurious and memorable, which is in line with the brand’s new aim, but it lacked a modern luxury feel to balance the whole thing out. Was it a homerun? We’re still debating on this one. Agency: Imagination, Detroit.

Honda seemed to be pushing its racing bona fides, which are good, but not well known among Americans. The most striking part of this mostly sterile white footprint was the brand’s Formula 1 racer, surrounded by a slash of red bleeding through the alabaster. Honda kept it simple but eye-catching, which had attendees craning their necks to get a look at the lovely design.

Away from the main floor, GM set itself apart from competitors by taking over a private hall, where it celebrated its return as the world’s biggest automaker. Inside, the Detroit automaker showcased only its most important new products: the new Impala on the main stage; the new, more powerful and more luxurious Cadillac CTS-V, which has been making auto industry insiders drool since its introduction; and the GMC Sierra, which GM is positioning as a the only ride for a high-end wilderness man who likes a single malt scotch by the fireplace at his hunting lodge as much as he likes the hunting itself. Agencies: Jack Morton Worldwide, Detroit; Czarnowski, Chicago.

There were some exceptions to the Luddite love, and Ford’s main exhibit had one of the coolest. It was an Augmented Reality video activation, and it was one of the biggest ones we’ve ever seen. The screen was about 12-feet by 18-feet, and the fun was just as big. Before taking part, consumers registered and were issued an RFID card that gave them access to interactives throughout the brand’s footprint. They tapped the card on a panel, then stepped inside a cycle circle and faced the screen. From behind, the roar of a rally-spec Ford Focus screamed out of thin air. At the wheel was Ken Block, one of the brand’s key celeb spokespeople and a world-champion drifter and rally driver, who proceeded to do doughnuts around the participant. Afterward, Ford emailed the videos to the attendees for them to post and enjoy. Agency: Imagination, Detroit.