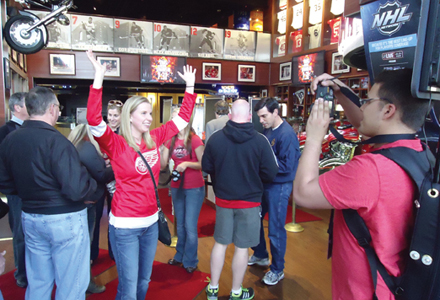 To raise awareness and capture fan data for future marketing efforts, NHL Network is activating an augmented reality-based brand activation campaign through the playoff season. The guerrilla promotion, dubbed “Raise the Cup,” lets hockey fans have their photo taken as they hold, or at least appear to hold, the sport’s beloved Stanley Cup overhead. The playoffs, which began April 11, are slated to end the week of June 6.

Throughout the Stanley Cup Finals and during the preceding playoffs, two-photographer teams travel to sports bars and team events in all the contending cities, as well as to the actual games. Amid the playoff excitement, fans can pose with hands held high, as if hoisting the Cup. A digitally enhanced camera then “places” the Stanley Cup within their grasp. All other photo elements—from their pridefully worn team jersey to the location, to any companions in the background—remain unchanged.

At the events, a video monitor mounted above both photographers’ backpacks cycles through the evening’s prior virtual Cup photos—prompting still more photo requests, about 200 a night.

Once the photo is taken, the subjects get an activation card directing them to the website
networksweeps.nhl.com, where they can sign in to receive their printable, emailable, Facebook-postable Stanley Cup photo, as well as to enter a bonus sweepstakes for the chance to win a VIP trip for two to the 2013 Bridgestone NHL Winter Classic, in Ann Arbor, MI.

Social media support for the photo events comes from NHL Network tweets (@nhlnetworktour) and Foursquare updates announcing the upcoming sites. The NHL teams and the scheduled sports bars also tweet to their own customer bases.

”The ‘Raise the Virtual Cup’ campaign is a fun and effective way to reach hockey fans during the most intense and exciting time of the year,” Joe Loreski, vp-affiliate sales and marketing at NHL Network, told Buzz. “We want to continue to drive fans to NHL Network to keep up with all that’s happening throughout the NHL.” Agencies: Cenergy, East Aurora, N.Y.; Step Logic, Marietta, GA (handled programming for the augmented-reality photography) and Prime Services, Williamsville, N.Y. (handled the online sweepstakes and data capture.)