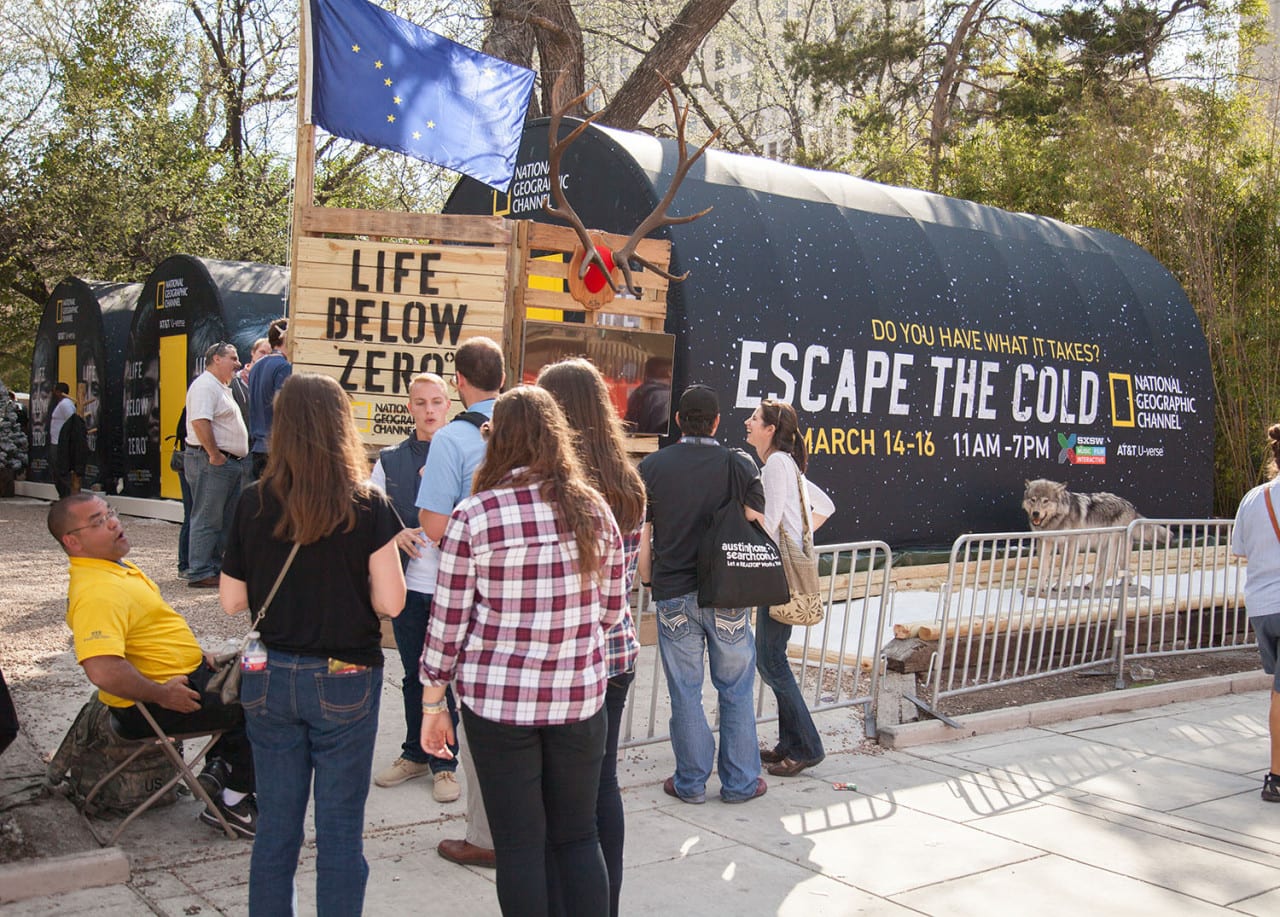 “Life Below Zero” is a top-performing National Geographic Channel series chronicling the challenges of life in the remote Alaskan wilderness. Ahead of the April 9 season premiere, the brand set up a SXSW experience March 14-16 in Austin that immersed hip techies and influencers in the harsh lifestyle of the show’s stars. Dubbed “Escape The Cold,” the brand challenged attendees to test their ingenuity in a race against the clock.

The footprint included three 22-foot by 12-foot insulated arctic tents connected to AC units that dropped temperatures inside by 20 to 30 degrees. Attendees who signed up were placed in random teams of six and charged with working together to “escape” by solving puzzles within 20 minutes. The challenges incorporated series-inspired elements within the tents—pine trees, snow and ice fishing included. To gain clues to solve the puzzles, attendees completed tasks like tapping into wells, digging through snow and tracking animals, all activities that people on the series do. (One of the show’s stars, Sue Aikens, made appearances as well.)

The challenges included digital elements, too. Participants scanned links that led directly to content showing them how to perform some of the complicated tasks they were to replicate. On Twitter, anytime a participant tweeted to @LifeBelowZeroTV with #EscapeTheCold, they received a direct message that led to their next clue, helping amplify the experience and generate buzz for the show.

Elsewhere in the footprint: a photo experience by Social PIX, and design elements such as a stuffed 12-foot grizzly bear, a moose head and a wolf. There was a lounge featuring reclaimed wood tables, tree-stump seating, and an “antler ring toss game,” rustic bar and wood pallets that featured branding, hashtags and series information. To manage lines for the challenge, NatGeo relied on a reservation system that allowed attendees to register ahead of time, and then receive a text alert in advance of their turn.

“The timing of the premiere and SXSW aligned perfectly and allowed us to target influencers; more of a younger, urban population, that is a little bit harder for us to reach,” says Lori Kackenmeister, manager-consumer and digital marketing, at NatGeo. “While we believe in traditional linear marketing, when you can immerse someone in something that is so intangible as life in Alaska, we feel that is an invaluable experience.” Agency: AWESTRUCK Marketing Group, New York City.