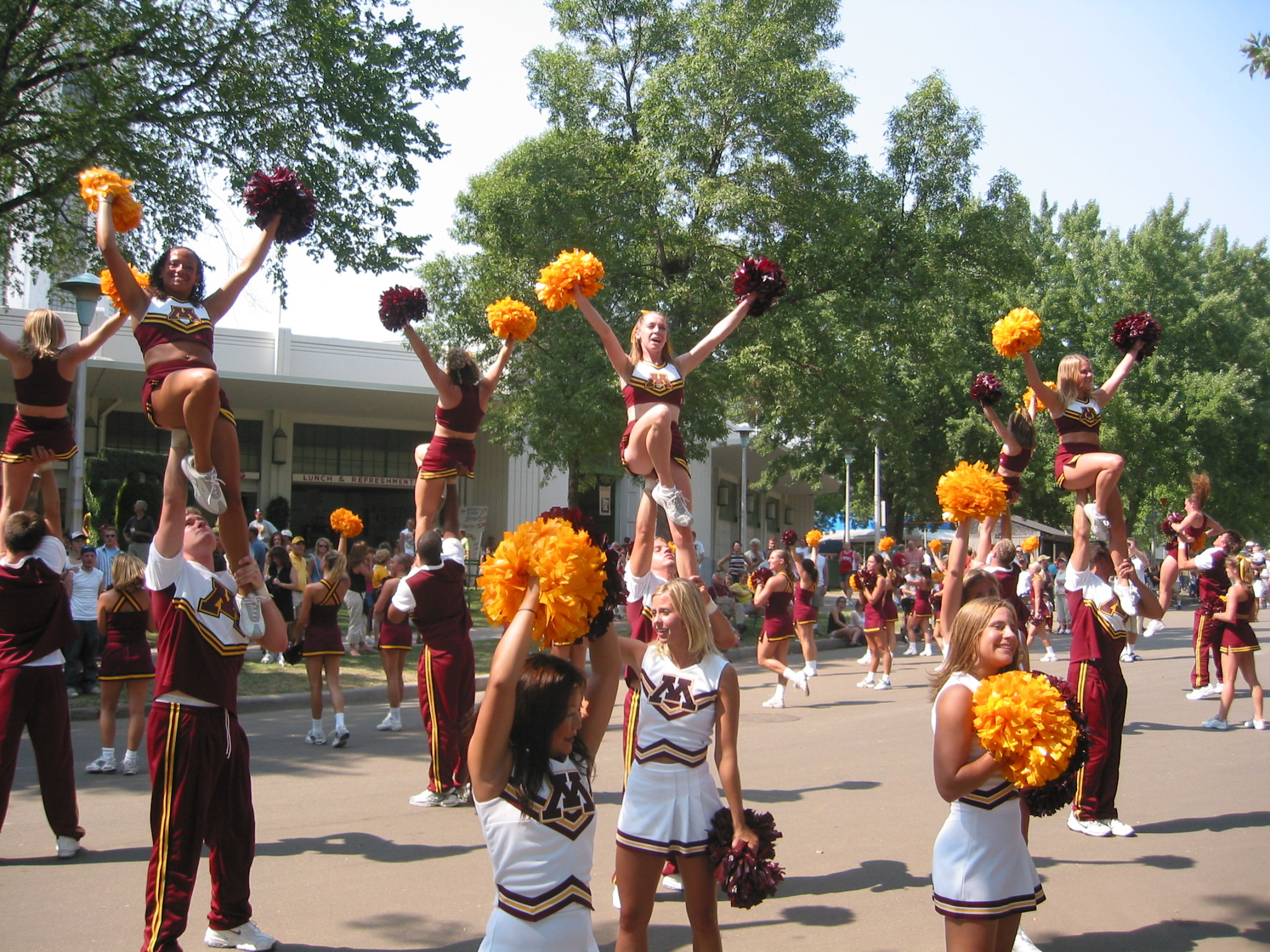 At the Minnesota State Fair friendly folks of all ages strolled along taking in the treasures of an all-American fair—the second largest in the nation after Texas. With food on a stick in hand (anything your sick mind can conjure up they have it on a stick) and the wholesome sounds of Richard Marx (Midwest native son) carried in the breeze the heartland seemed to march to the sound of a slower drumbeat. We on the other hand had to pick up the pace to bring you the best brand experiences. Like hearty Midwestern farmers if brands sowed there was plenty to reap. Did we mention there was a Miracle of Birth building? Think Animal Planet the even more unedited version. From Minnesota with love we bring you the sites and sounds of the state fair.

NINTENDO
Sure Nintendo could have just set up a Wii gaming station on one of the sidewalks and still attracted hoards of attendees. But instead it made sure to tie in to what differentiates it from other video games: its healthy lifestyle appeal. We found six Wii stations at the Health Fair building where health insurance companies and health specialists were exhibiting. Best Buy brand ambassadors wearing the store’s branded shirts manned the long lines of kids eager to check out the Wii. The American Physical Association leveraged the popularity of the Wii to attract an audience and Best Buy stepped in to say hey this is where you can get it. Nice! Participants walked away with informative literature about the health benefits of exercise as well as stationery supplies like branded pencils just in time for school.

COCA-COLA
What’s an American state fair without soda pop? Coca-Cola was all over the place. Its biggest presence included a large red hybrid-electric delivery truck which pulled passersby in and tied in to Coke’s eco-friendly efforts. Next to the truck the brand displayed sculptures created earlier in the day by various groups. The sculptures in the form of a house a dog a train and other shapes were all constructed from empty soda bottles—a nod to recycling and reuse. Fair goers could vote for their favorite sculpture at a laptop kiosk. (Not asking participants for contact info in exchange for their vote was a missed opportunity for data collection.) Coke gave out a cash prize to the winner at the end of the day. At the X-Zone entertainment area on the opposite side of the fair younger crowds rocked out to the video game Rock Band and cheered on skaters and bikers at a skate park. Coke was there too. It roped off an area near one of its vendors for 3-D street artist Rod Tryon which drew in crowds as he created art with chalk on site. And what do you need after standing around and watching an artist create? A nice cold Coke of course—right this way. Agency: Alive Companies Minneapolis.

CULLIGAN
Outside the fairgrounds water bottles were sold for $2 out of beach coolers. Inside they were almost double the price. Either way paying for overpriced bottles of water can leave a bad taste in folks’ mouths. No worries: Culligan to the rescue. Culligan did a real service to fair goers braving the Minnesota sun. It stationed water coolers outside of its pop-up with free water for the taking throughout the day. You’d better believe the lines were long. The coolers were connected to stations manned by Culligan reps who urged people to sign up for a free home cooler for a month by filling out a form. Behind the stations the Culligan pop-up looked like a miniature water plant with all sorts of pipes and tanks. Visitors could tour the premise and learn about the product. Oh—and refill their cups on the way out.

ROCK BAND
What do rock bands do in the summer? They go on tour. And that’s exactly what the hit video game Rock Band did too hitting music festivals and state fairs across the country. In Minnesota it set up in the X-Zone entertainment area where all the cool kids hung out skating biking and getting tattoos. On stage Rock Band brand ambassadors did demos before a shy but willing crowd. Soon the crowd gained confidence and they rocked on stage like bad boys. To fine-tune their skills participants could try out Rock Band back stage on a flat screen before facing the revved up audience. And less daring folks could win Rock Band by entering their info in a laptop kiosk in hopes of rocking out at home instead. The music alone playing everything from Blink 182 to Boy George was the bait that hooked in the crowds. Rock on! Agency: Adrenaline Marketing St. Charles IL.

THRIVENT FINANCIAL FOR LUTHERANS
To build awareness for the work it does with Habitat for Humanity Thrivent Financial for Lutherans set up a family-oriented footprint with entertainment for all ages. In a large truck brand ambassadors guided visitors through an exhibit telling the story of struggling Americans and how Habitat for Humanity steps in to help with financial backing by Thrivent. Visitors received a lanyard with a tag telling the story of a struggling family. Inside the truck the visitors were asked to read their tags to see if the family they were given at the start of the exhibit had been able to turn their life around. Some did and some didn’t. Visitors could take literature about Thrivent home and choose from a branded hat tote bag or water bottle. Outdoor activities included a contest to see who could hammer a nail into a board the fastest. The new record was posted daily. And for the littlest fair goers there were coloring stations with a toolbox theme Legos a ring toss and a corn hole (tossing sand bags into a hole: a Midwest favorite). For data collection there was a green screen photo activation with construction building themes. Participants received a card to retrieve the photo on Thrivent’s website. Agency: Mobile Media Enterprises Norcross GA.

L’OREAL
The Color Space by L’Oréal felt like Macy’s on Black Friday. Visitors to the Color Space were greeted by a red carpet that led to seven specialized stations: Skin Lab Cosmetics True Light Pod Hair Care Hair Styling Full Service Consultations and Hair Color. Mirroring make-up counters at chic department stores each station had a knowledgeable staffer and some required personal info entered into a laptop for data collection. Example: at the True Light Pod visitors provided their email before interacting with a computer-controlled mobile beauty lighting experience. It showed folks what they look like in different lighting environments like at the office or in a local hot spot to determine which foundation best matched their skin tone.  One of the most popular stations was the Full Service Consultation area complete with a skincare analysis by a professional and a mini-makeover. L’Oréal handed out a nifty map locating each station and what was offered. On the way out visitors could purchase products at the retail station. Visitors walked away with a $2 coupon. Agency: Legacy Marketing Partners Chicago.

U.S. MARINE CORPS
When we passed by the U.S. Marine Corps footprint the crowd was cheering. They were cheering for their girlfriend father or brother as participant after participant tried to break the record of the previous person on the pull up bars. To join the ranks folks had to sign up first by filling out a form—a way for the U.S. Marine Corps to follow up. There were various prizes corresponding to how many minutes people held on. For the men 20 minutes awarded a shirt; 18 a hat; 15 a water bottle and 10 a lanyard. For women 70 seconds won a shirt; 63 a hat; 52 a water bottle and 45 a lanyard. When we left a young man was still trying to break a 70-year-old gentleman’s 26-minute record.

FORD SYNC
Modeled after “Name That Tune ” the Sync That Tune challenge lured passersby eager to test their music knowledge. The tie-in was to Ford’s newest vehicle feature —Microsoft’s SYNC. At a gaming area set up with two stations facing giant SYNC models players battled it out as songs blared and a charismatic emcee kept the juices flowing. Contestants registered on site then received a branded wristband and lined up to play all challenges. The SYNC On Tour Count Challenge required them to guess how many Ford Lincoln and Mercury music notes fit in the SYNC logo; the SYNC Tech Challenge had them try to locate the nearest gas station movie theatre and more using Sirius Travel Link. Agency: Xperience Communications Detroit.

TEXAS ON TOUR
The Lone Star State is coming to a town near you. To promote Texan-style tourism Texas on Tour is hitting 15 spots nationwide. A bit off the beaten path at the fairgrounds Texas on Tour had a decent amount of people lined up to experience all it had to offer. One of the better activations at the fair Texas on Tour offered a jam-packed experience with everything from virtual kayaking and green-screen photos to live concerts. The activation was all about data collection. When someone walked up to the footprint a brand ambassador asked for some personal information and then handed over a Texas on Tour All Access Pass card. At each new experience a brand ambassador swiped guests’ cards. The first experience was in a large dark navy blue dome theater that turned day into night. Wooden benches were set up in a campfire style environment facing a giant projector screen. When everybody was seated underneath the hologram star-filled sky another hologram of a cowboy appeared on the screen. He told his tales of Texas and sang a little ditty. The next stop was virtual kayaking followed by green-screen photos that put folks on the beaches of Texas. The last stop was a trivia game about Texas. On two flat screens visitors could test their Texas knowledge by identifying which landmarks were from the Lone Star State. Winners received a branded bandana. Visitors could linger and enjoy live concerts and receive a CD featuring Texas music. Agency: RedPeg Marketing Alexandria VA.