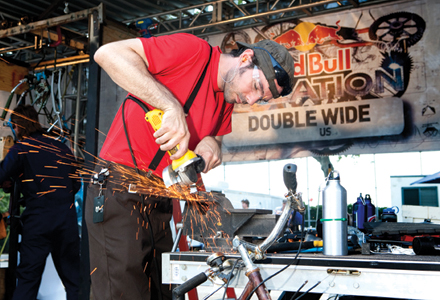 There is a group of consumers out there that is almost impossible to define demographically, but they are affluent, smart and growing more numerous all the time. They call themselves makers, lifehackers and inventors and they delight in recycling found objects to make something new. Their inventions range the gamut from handmade crafts, quilts and clothing to robots with flamethrowers mounted on top. They are young and they are old; they are experts in their fields and they never went to college; they are men and women of all races and backgrounds and they have a hunger to make a mark on the world. They are generally eco-conscious, too, and like to do what they can to make the planet greener. They support environmental policies and oppose companies that they perceive as unwilling to do the same.

For the past seven years, they’ve had a home where they can create whatever they can conceive. That’s when O’Reilly Media’s Make magazine launched the first annual Maker Faire in San Francisco—a DIY festival that is free for exhibitors and is chock full of booths celebrating everything from robotics to recycled fashion. Since then, Maker Faire has grown from about 20,000 makers and attendees to about 225,000 across three annual events in San Francisco, Detroit and New York City. And for much of that time, there have been few brands that really understood the opportunity. The disconnect is most likely the result of a perception problem.
“Our demographic is about educated people who care about the world around them, have money and kids and want to make a difference,” says Sherry Huss, maker-in-chief for Maker Faire and Make magazine at O’Reilly Media. “They are perceived as anti-consumerist, but they’re just savvy consumers. They know they’ll be consuming, but they try to be more discerning about what they consume.”

So the Faire started attracting sponsors, thanks to the growth in the events and the momentum of the movement. GE, Google and Ford are all sponsors this year and they’ve proven to the maker community that they’re in on the scene, too. In hard numbers, most makers and attendees at Maker Faire are in the 30- to 45-year-old age bracket, have at least a bachelor’s degree and have families. In fact, better than half of attendees that come are there with the entire family.

First-year sponsor GE took note of the danger of coming on too corporate, so it made sure to showcase the brand’s own makers, creative history and philosophy. “We see ourselves as a company of makers and inventors,” says Linda Boff, executive director-global digital marketing, corporate, commercial and communications at GE. “This market is really important to us, since right back to our Edisonian roots, we’re about purposeful invention.”

She says the brand saw the Faire as an opportunity to talk one-on-one with like-minded people who are interested in technology and innovation and present them with some of the ways GE is creating and making, too. The brand had a BMI calculator on site to showcase its medical innovations and thousands of the San Francisco attendees came through to try it out. Two of GE’s scientists did presentations about some of the its newest technologies.

The key was to have the real engineers on site, not the p.r. people. “We tried to activate in a way that was authentic to the audience,” Boff says. “We spent a lot of time talking with O’Reilly Media to learn about what would work there. The more accessible we are, the better they can relate to us.”

The maker audience is right in the wheelhouse for Google, too, since both groups share a passion for open source and innovation, so Google has been a part of the Maker Faire scene for five years. This year, its activation was all about SketchUp, a 3D modeling program that is designed to make life easier for designers, fabricators and makers of all stripes. In addition to SketchUp, the brand also had Google robotics folks on hand to show off and execute some weather balloon launch experiments.

“The Maker Faire audience is our user group, too,” says John Bacus, product manager for SketchUp at Google. “From our perspective, making things is a kind of magic—making something out of nothing is amazing.”