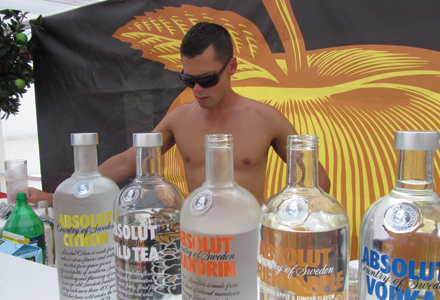 New York only passed the same-sex marriage law this July, but the LGBT community has been fraternizing on the state’s Fire Island since the 1960s. For the uninitiated, the island is divided into several sections, two of them mostly frequented by the LGBT community—the Pines primarily by gay men and Cherry Grove by lesbians. The Pines also boasts having the most expensive real estate on Fire Island with about 700 houses in one square mile. The thousands of vacationers that flock to the area—most on timeshares—live and work in Manhattan. And though more same-sex couples are starting up families, most remain single in lucrative professions with a whole lot of disposable income. It’s a paradise for brands that understand how to connect with this community.

EM hopped on a ferry this August to visit the Pines and checked out one of the summer’s biggest beach parties there and more. We take you there.

ASCENSION BEACH PARTY
Ascension Beach Party, held in the Pines, celebrated its sixth year this August. Though a handful of straight couples and lesbians attend, the majority of visitors are gay men ages 21 to 60 with 30-year-olds being the sweet spot. The event is part of a string of circuit parties throughout the country, which have been inherently controversial because of a history of unsafe sex practices and drug use. However, that image is changing as day beach parties like Ascension move away from the traditional circuit party that starts at 11 p.m. and ends at 5 a.m. to a more casual environment that runs from noon to 6 p.m. on a Sunday.

“The value to Ascension is that it’s very well publicized and hits a good demographic because some people might be investing in the cabanas or spending money at a VIP area or a general area. It’s much more of a cocktailing crowd so you have a different platform to show a brand,” says Scott Seitz, president at New York City-based SPI marketing, which handles Absolut vodka and Coors Light’s activations. “The goal for these programs is to go out and create a larger program throughout the summer that’s going to help [each brand’s] sales teams. Ascension is the culmination of this work.”

To make it a success, Ascension producers Eric von Kuersteiner and Sean Patrick Ryan provide their own trained brand ambassadors. “When we first started it was so important for us to have the right image, because anything that’s at our party reflects on us and builds towards our long-term commitment with our sponsors.” It’s also important since attendees are paying more than $100 to get in. (Proceeds benefit LGBT charities). “One year we signed on a tequila brand and told them the type of brand ambassadors to hire, and they sent girls in string bikinis,” recalls von Kuersteiner. “That just doesn’t play off well with our customer base.”

Unlike that tequila brand there are brands that get it, like Absolut, which has been supporting the LGBT community on Fire Island for 30 years and is a good example of what brands can do at Ascension. This summer it set up a VIP area overlooking the dance floor.

“Our partnership isn’t just about a great party, it’s our ongoing commitment to the community since the party benefits both the Fund in the Sun Foundation and the National Gay Lesbian Task Force,” says Jeffrey A. Moran, vp-public relations, event marketing and sponsorships at Pernod Ricard USA, which owns Absolut. “There are also an exceptional number of influential community members on the island for the summer, helping Absolut further the message about our 30th anniversary as well as the introduction of our newest flavor, Orient Apple.”

Bar owners, distributors and influencers were invited to Absolut’s VIP area to chat away from the noisy dance floor. A handsome male bartender manned the bar and there were white couches, chairs and tables decorated with apples in clear vases and Asian elements that tied back to Orient Apple. There was an additional cabana and bar area on the sand open to VIP ticket holders. Hot male dancers atop undergear.com branded miniature stages peppered throughout the dance floor sported Absolut branded speedos. Monster Zero was passed around, too, and there were Grindr (a geosocial networking app for gay/bisexual men) branded beach balls on the ground. Coors Light, which Seitz says was one of the first beer companies to offer same-sex domestic partner benefits back in the early ’90s, had a similar VIP area set up adjacent to Absolut in addition to banners scattered throughout the event.

Does Absolut and Coors’ presence at events like Ascension help move the needle in the LGBT market? It seems that way.  “I look at what companies are supporting the LGBT community. Now that I see Coors Light at Ascension I might consider it as a light beer choice,” says Alan Cohon, an attendee at Ascension who works in human resources in Manhattan.

The official coconut water of Ascension, Zico, was on-site as well to hydrate consumers. Zico’s main target is people who pursue a healthy, active lifestyle, and the guys on Fire Island couldn’t be more buff. The brand set up a sampling station and handed out bottles of product. “We have been going to Ascension for the last three summers. It’s an amazing crowd and they take care of themselves, and they’re educated and interested in learning about new products and what’s good for their bodies,” says Laura Sauls, marketing associate at Zico. “The hope is that the vacationers on Fire Island drink the product there and then look for it at their local retailers” (Agency: Ignited, New York City).

BEYOND ASCENSION
It’s probably safe to label VitaCoco coconut water and Chopin vodka pioneers. If it’s not, we’ll dub them that anyway for what we saw the weekend we visited the Pines. They were the only two brands activating on the harbor on the Saturday leading up to Ascension. Both programs were handled by New York City-based Factory 360, whose co-founder and partner Michael Fernandez and his team have had a timeshare on the island for years and approached both brands about activating at the Pines this summer.

Since starting the activation earlier in the summer, VitaCoco started selling 150 cases a month—up from zero on the island. And, Chopin says it’s growing in double digits this year.

“We haven’t taken out any ads in New York City but we have heard from retailers this summer saying ‘I don’t know what’s happening but this brand is on fire’ and it has never moved like this and they don’t’ really know why,” says Sebastien Besson, vp at Chopin. “Of course, we are assuming this is a direct effect of the work on Fire Island.” What have been the brands’ approaches? We take a closer look:

VitaCoco
Because there are no cars on Fire Island, VitaCoco strategically placed its hydration station where it would be the first thing consumers saw as they arrived and departed on the ferry. The activation featured Brazilian flag-inspired colors with a neon green beach umbrella as the main draw and two “brand educators” singing along to upbeat music playing in the background. They added wooden crates arranged to appear off-kilter, which supported the casual island theme and reinforced the brand’s strategy of presenting the product in a manner that makes consumers feel like they’re discovering something exotic.

“The appeal of Fire Island is that we’re interacting with LGBT early adopters that are in the world of fashion, music, theater, creative professions in general, but also on the more business corporate side,” says Arthur Gallego, communications director at VitaCoco who likes the “discovery” aspect he’s bringing to consumers with this strategy, but isn’t ruling out other sponsorship opportunities on the island for the next round. Consumers could also grab VitaCoco at the handful of retailers on the island that prominently display the product.

How did VitaCoco get on all the shelves? “We work closely with the owners of the community, who own about 80 percent of the few businesses in town,” says Gabriela Neves, partner at Factory 360. “We worked with VitaCoco’s sales team to go in and get them nice displays and now they’re the only coconut water you can buy at the Pines.”

Chopin
Luxury vodka brand Chopin stayed away from Absolut’s territory at Ascension claiming they’re after a crowd that’s more interested in cultural events like the Boardwalk Talk series presented by Chopin Vodka it sponsored all summer long at the Blue Whale restaurant. When EM visited, the host of the series was interviewing ballet choreographer Christopher Wheeldon, and each table was topped with a picture of Chopin’s featured cucumber martini. The brand’s name was splashed on a banner above the speakers and a magnum-sized Chopin bottle topped the table next to them. The presenter also announced Chopin as the sponsor.

“We do not want to be like Absolut or some other vodka brands going after big clubs and being a party brand. We are going after a market that is highly sophisticated, because we are a luxury brand. We wanted something special that will make us stand apart from other brands,” says Besson. “The Pines is well known for being a party place but at the same time there has been an evolution. It’s a place with high-income residents, a lot of gay couples with families and kids and we thought let’s try something new.”

The series was held every Saturday with varied discussions, including how to organize a gay marriage. One of the most popular events was a talk by LGBT rights activist Larry Kramer. The 100-person space turned into a standing room as it filled to capacity that afternoon.

“The gay consumer was an early adopter in the 90s for Chopin, so we certainly want to stay close to them and be the same brand we always were in support of what is truly sophisticated and we support our consumers,” says Besson, whose only fear is that next summer a competitor will try to beat them to the punch.  EM