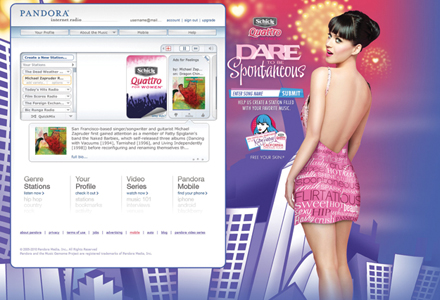 Been to any good concerts lately? How about a concert with a killer brand sponsorship program that made a meaningful connection with you before, during and after the live event? Concert tour promotions are a staple in the brand marketer’s bag of tricks, but the engagement model is getting a much-needed overhaul as marketers and promoters have found more engaging ways to integrate the investment across multiple online and offline channels.

Schick’s Quattro for Women brand of razors successfully implemented this model for its sponsorship of pop singer Katy Perry’s California Dream Tour. The brand had never partnered with a celebrity before, but Katy Perry’s uninhibited persona made sense for its 2011 “Dare To Be Spontaneous” platform, which targeted women ages 18 to 34 and challenged them to skip a day or two of shaving (after using its high-performance razor, naturally) and seize life’s spontaneous opportunities. Schick started with an online push, and then activated on-site with an identical look and feel, all while keeping up the momentum online with fresh content created just for the web.

“You want to make sure you’re consistent wherever your fans are. For us, we wanted to make sure that ours and Katy Perry fans had a consistent experience with the brand wherever they were and we felt it was important to introduce the partnership gradually to fans rather than just throw it out there with all the elements of Dare To Be Spontaneous at the same time where it might not make as much sense,” says Christine Galotti, brand manager for Schick Quattro for Women. “When fans went to the concerts they were seeing the same type of experience on-site that they were online from us. If they weren’t fans of Quattro for Women on Facebook, when they eventually went on our page they would see a look and feel like what they saw from us on-site.”

The sponsorship also included a 12-page advertorial in the Katy Perry’s Collector’s Special Interest Publication of Us Weekly. On music website Pandora, Schick created a Spontaneous Mixed Tape (a 15-second audio ad prompted users to submit songs that “dared” them to be spontaneous) that could be shared on Facebook.

Schick started buzzing about Dare To Be Spontaneous months before the U.S. tour was even underway. On Feb. 3, it previewed its Valentine’s Day Katy Perry Facebook e-card activation to bloggers at New York’s Hudson Hotel Penthouse. On Valentine’s Day, the brand officially kicked off the platform and the e-cards to consumers with a Facebook coupon offering a Quattro for Women TrimStyle (a four-blade razor and bikini-trimmer in one). Consumers could choose from four co-branded e-card templates featuring Katy Perry in her famous latex dresses. During that two-week window Quattro for Women fans grew by 11,000; 25,000 e-cards were created and shared; and more than 6,500 users returned to interact with the application daily.

“We deliberately introduced the partnership digitally first to help increase our own Facebook fan base (Katy Perry had 11 million Facebook fans at the time; now she has 36 million), so that when we were ready to announce other parts of the promo or digital apps or whatever else was coming, we had a larger fan base to engage with,” says Galotti.

To keep the momentum going, Schick’s team in March traveled to Wales to conduct a series of interviews with Katy Perry and then posted the unique content on Facebook along with other aspects of the sponsorship, such as its Katy Perry Getaway sweepstakes that offered fans a chance to win tickets to her show in her hometown of Santa Barbara.

At the concerts, Schick engaged fans at its 400 square-foot booth with a photo activation that played up the theme of spontaneity. Groups of fans posed in front of a green screen and then moved on to a digital kiosk to spin a Dare To Be Spontaneous wheel to land on a “spontaneous” background for their photo. More than 75,000 consumers were driven to Facebook to download their photo.

Schick also brought to life the latex dress Katy Perry posed in on the Facebook e-cards by having one of the singer’s former dress designers custom-create pink and purple latex dresses for its brand ambassadors. (Watch the video highlights at: http://bit.ly/katyschick.)
When the tour was extended through the fall, Schick’s team had to come up with new engagements for fans. The result: a Katy Perry look-a-like contest on Facebook, which encouraged fans to submit photos dressed like the singer. The winner flew to Las Vegas with a friend to meet Katy Perry and dance with her on stage. More than 20 million unique users interacted with the contest. On Sept. 7, Schick took the look-a-like contest offline and “dared” bloggers that it had been engaging throughout the sponsorship to dress up like Perry, too, and sing their favorite song by the artist at Pulse Karaoke in Times Square. The bloggers were given Katy Perry themed props to wear—blue wigs, peacock wings, nerdy glasses—and were encouraged to tweet throughout the night with an event hashtag to bounce the conversation back online (Amplitude Marketing Group, Newtown, CT, handled).

“We wanted to increase awareness in a competitive area in a relevant and meaningful way for consumers, while staying true to our positioning as a beauty brand with an edge,” says Galotti.  “It’s difficult to get people to engage with your brand, and then have them continue engaging with your brand. But we’re seeing continued engagement and people constantly talking not only about Katy Perry, but the razor and brand, too. We definitely achieved our objectives for this program. The proof that this was successful is that our Facebook friends increased by more than 100,000.”

’Cause Schick, you’re a firework. EM