Best of Both Worlds: Going b-to-b and b-to-c - Event Marketer 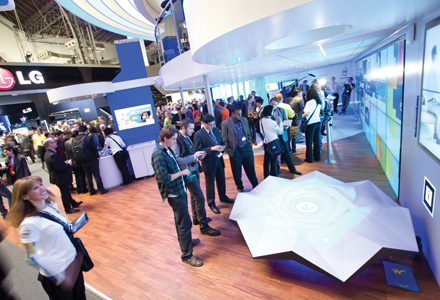 Best of Both Worlds: Going b-to-b and b-to-c

The world of b-to-b marketing is getting a much-needed upgrade thanks to a few enterprising brands that are recognizing that the same people who “conduct business” on the trade show floor are also consumers who enjoy a little fun and excitement, too. As a result, some exhibitors are taking cues from consumer events to enliven their shows and increase the effectiveness of their b-to-b programs.

Always one to lead the way, Intel at this year’s Mobile World Congress trade show in Barcelona (Feb. 21-March 1), executed a new engagement strategy in its booth that transformed its traditional b-to-b program into an immersive, b-to-c-style experience that got high marks from attendees. The change of strategy was part of the brand’s effort to change its image from a chip and processor provider to an end-user brand.

The 40-foot by 100-foot booth featured three key experience zones created to connect with original equipment manufacturers like Motorola, Nokia and LG, service providers like AT&T and Verizon, as well as developers and press. The three zones included “What’s in Your Pocket?” where participants shared their thoughts and photos by downloading an app and then answering multiple-choice questions. The survey results were presented on a large media wall, which had tablets in front of it allowing attendees to interact with the wall, along with pictures and other content. At the “User-controlled Projection Mapping” zone, attendees were encouraged to transform a blank, multi-dimensional sculpture into a dynamic art piece to reinforce how mobile devices will change in the years to come thanks to Intel technology. This area featured projection-mapping sequences by Brazilian artist SuperUber and Intel captured attendees’ emails to send them a picture of their sculpture. The “Mobile Mix” experience paid homage to the power of group creation with a professional “table jockey” who worked with attendees to perform mobile music mixes on a customized ReacTable. Objects on the table based on Intel solutions triggered electronic music tracks and audio sequences. The table jockey performed every half hour for five minutes and then attendees were invited to create their own mobile mixes. The interactions were captured on an overhead camera and displayed on a media wall.

There weren’t any traditional demo pods or product displays at this year’s booth, either. Instead, there were Digital Demos, which took the place of demo stations. Each segment had a flash-based presentation by an Intel expert using a pre-loaded tablet, making it all seem very Apple Store-esque. And, there was an Interactive Glass Showcase that highlighted new Intel-based mobile devices inside illuminated cubbies. When attendees placed their hands inside the cubbies, it triggered dramatic lighting and short audio sequences about the product on the glass wall (Live Marketing, Chicago, handled).

Intel also ditched its conservative cocktail reception and instead hosted a slammin’ party featuring the hit dj band LMFAO, which popularized the song “I’m Sexy and I know it.”

If none of this sounds like a b-to-b event, that’s the point. “We wanted to shock people a little bit and make them do a double take. We wanted to do some things that people didn’t expect from us,” says Marc Wallis, events program manager at Intel. The company also announced its soon-to-be launched phone in partnership with European service provider Orange at the show. “We’re still leaders in infrastructure, but we also have a great end-to-end story to tell. We built this whole booth to tell that story, and to surprise attendees was number one.”

Though a more consumer-style event experience was a hit, there are some things it can’t replace for tech industry buyers, says Wallis. “For this audience, we might have to bring back more technical and product information, whether through product demos, or even stage presentations, or expert bars. But at the same time, really well-crafted experiences can have a role with this audience also.” EM