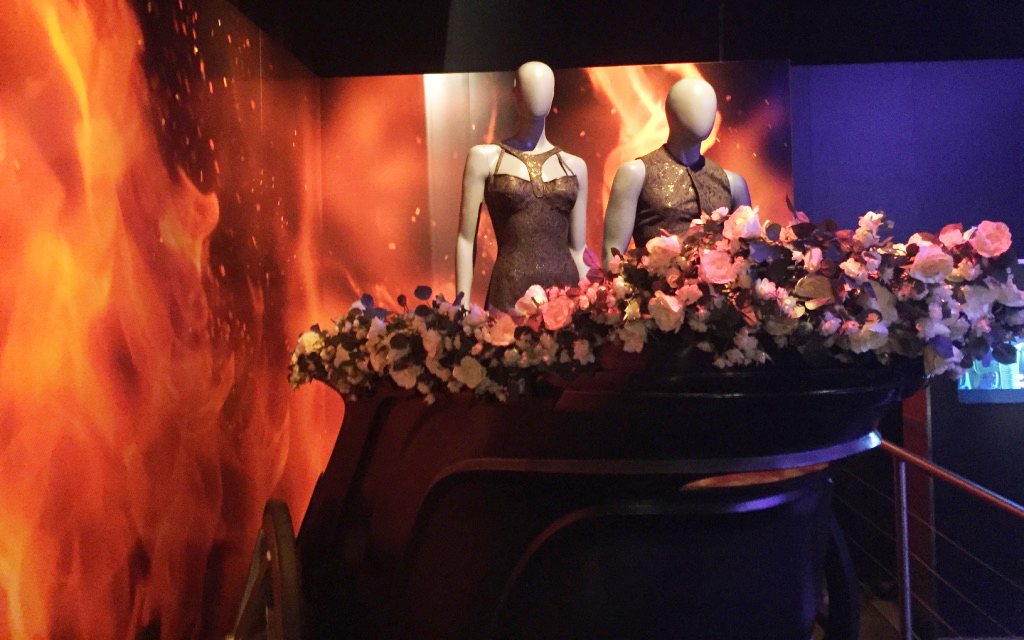 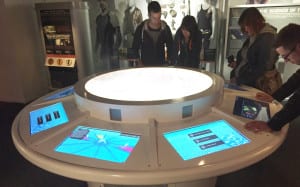 A smaller version of the Gamemaker’s table, also operated via touchscreen, illustrated the science and technology behind the hazards that plague tributes inside the arena, such as poisonous fog.

As fans of “The Hunger Games” across the world ramped up for the Nov. 20 release of the fourth and final film in the series, “Mockingjay Part 2,” another piece of the franchise was catching fire in New York City. Located in Discovery Times Square, The Hunger Games: The Exhibition experience has been attracting droves of fans with a vibrant re-creation of the story that includes more than 1,000 props, 46 costumes, recreated sets and a variety of interactives. To find out what all the hype was about, EM volunteered as marketing tribute to check out all the action firsthand. (View our gallery of the tour here.)

The core of the exhibition is constructed around seven distinct zones: District 12, the Tribute Train, the Capitol, Making the Games, District 13, Katniss’ Journey and a Fan Gallery. But before we could get a closer look at the dystopian world of Panem, a projection mapping experience kicked things off. As the room just outside the central exhibition area went dark, Effie Trinket (played by Elizabeth Banks), who serves as the District 12 escort in the movies, welcomed us to the experience with a pre-recorded greeting. Shortly afterward, Banks appeared onscreen as herself to offer a short introduction to the dynamic displays about to be unveiled.

Finally, with a dramatic opening of the doors to the exhibition, we stepped inside a reimagined District 12 and began our journey. The experience felt authentic right from the start. Recreated film sets were chock full of details, right down to the paneling on the exterior of Katniss Everdeen’s home. Sound bites from the movie, including chatter inside the Capitol, soundtrack music and the well-known Mockingjay whistle could be heard throughout the tour. Even the lighting added a touch of realism that helped bring the story to life.

Between the expertly exhibited costumes, displays of film factoids, movie sketchbooks and intricate set designs, there was more than enough to feast the eyes on. But showcasing a story like “The Hunger Games” requires some action, and with various interactives found throughout the space, the exhibition, created by Lionsgate in collaboration with Thinkwell Group and Imagine Exhibitions, delivered. 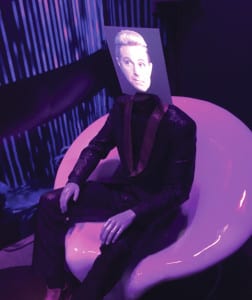 A photo op allowed consumers to be “interviewed” by Capitol TV personality Caesar Flickerman, whose face appeared on a tablet.

A digital map of Panem allowed visitors to view detailed profiles of select citizens, a breakdown of each district, including its primary source of income and a history of the region, and various other pieces of trivia, all operated via a large touchscreen. A smaller version of the Gamemaker’s table, also operated via touchscreen, illustrated the science and technology behind the hazards that plague tributes inside the arena, such as poisonous fog. And woven in between prop displays was a physical challenge area featuring three large screens that showed a pre-recorded demonstration by “The Hunger Games” stunt choreographer Sam Hargrave, who urged visitors to learn defensive moves through a step-by-step tutorial that used scanning technology to assess the participant’s form.

Other interactives included a propaganda film-making kiosk and voting stations that asked questions such as, “If you lived in Panem, what selfless act would you take to save a life?” along with the results of the poll and how they related to scenes from the movies.

The vitality of the exhibition was further enhanced by the various screens sprinkled throughout the space, which showcased iconic scenes from the first three films, as well as assorted interviews with members of “The Hunger Games” cast, who discussed the moral and ethical issues the story conjures up.

As an added bonus, visitors themselves could take part in a photo op in which they are “interviewed” by Capitol TV personality Caesar Flickerman (played by Stanley Tucci). A small setup inside the exhibition’s Capitol area displayed two chairs facing one another—an empty one for the willing interviewee and another occupied by a mannequin’s body with a tablet on top displaying Tucci’s animated head. (It’s not as creepy as it sounds, we promise.)

For those looking for a more immersive photo/video opportunity, the last stop before exiting the exhibition offered the real deal. A green screen engagement gave small groups of visitors a chance to throw on capes and digitally take a chariot ride through the Capitol—complete with wind effects—mimicking a scene from the tribute parade in the second film. Visitors could then opt to purchase the (hilarious) final products.

And then, of course, there was the gift shop—a place where a true fan could get lost for hours poring over an endless variety of souvenirs from aprons that read “Peeta’s Bakery” to a recreation of Katniss’ wool shrug from the first film (priced at a cool $130) to mockingjay jewelry and beyond. We may have indulged. Hey, when in Panem…

The experience as a whole exemplified not only the technological prowess of both the film crew and the creators of the exhibition, but the power of bringing a cultural phenomenon to life, allowing even the biggest “Hunger Games” fans to uncover new elements of the story. Game on. 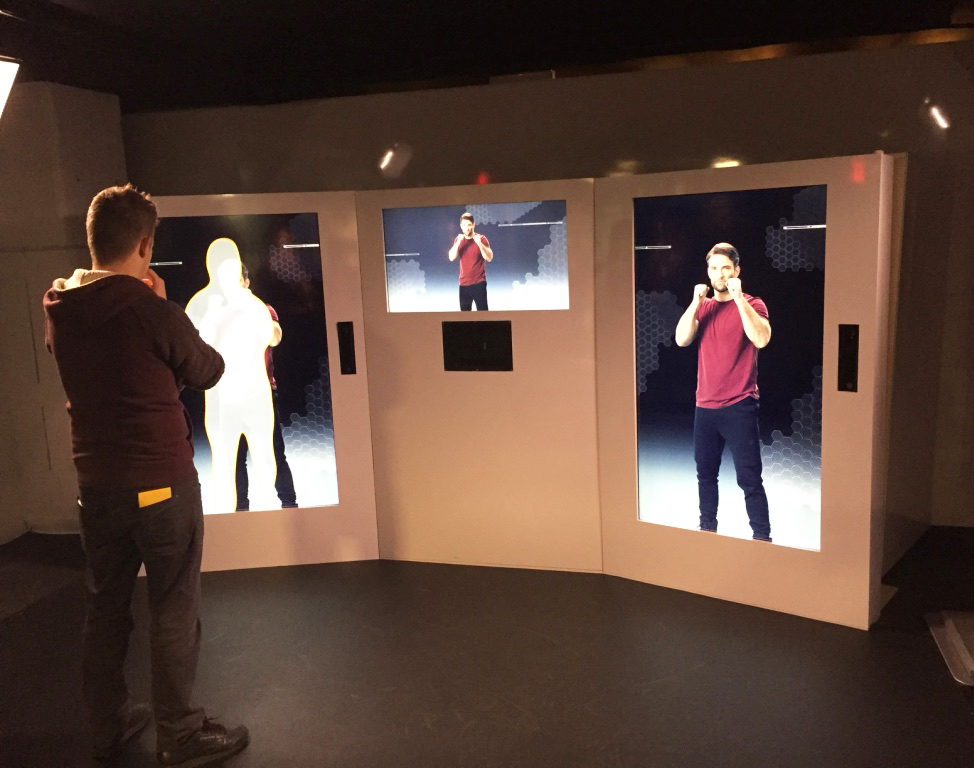