The Plusses of Partnership – Event Marketer 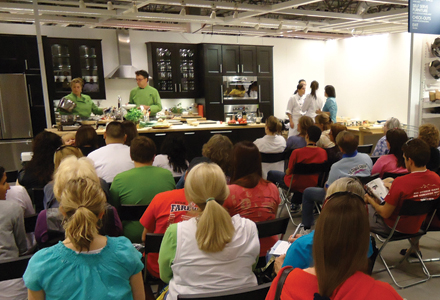 The Plusses of Partnership

Ever since the Swedish home store IKEA first set up shop on American soil more than 25 years ago, it has offered customers not only its furniture, but its full-fledged Scandinavian shopping and dining experience. (Swedish meatballs and a glass of lingonberry juice, anyone?) Thanks to its early efforts in innovating a unique retail experience, IKEA has earned a loyal following. But for those new consumers getting their home furnishing cues from experts in magazines, online and on TV, the brand has had to amp up its efforts.

These new efforts fall under the umbrella of IKEA’s ongoing Life Improvement Project, which started as an online program in September 2010 and on TV in collaboration with O, The Oprah magazine to convince consumers of its expertise in home improvement (Ogilvy, New York City; Ketchum, New York City, handled). A month after the program launched online the brand added in-store events, which weren’t a new concept to IKEA, but were repackaged as “Life Improvement Seminars” that ran through 2011 and picked up again this year. In addition to O, The Oprah magazine, the retailer also collaborates with media outlets like Cooking Light, Family Circle and “This Old House.” The events are held in areas of the stores that correspond to each topic and touch several elements that might help improve consumers’ lives at home, such as cooking healthy meals for the family in a comfortable kitchen.

Last month, IKEA kicked off its 2012 series with events like the Family Circle All Together Now on Jan. 14 in Tempe, AZ, featuring Celebrity “Designer Dad” Stephen Saint-Onge sharing tips on creating chic home spaces for families. At select IKEA stores, there are also seminars hosted in Spanish.

“Collaborating with these media outlets was a way to access experts and their knowledge, as well as pull directly from their audiences,” says Alia Kemet, US media manager at IKEA. “When we’re talking about broadening our base, we of course email our loyal customers, post on Facebook and tweet and promote in-store, but these are all people who are already exposed to IKEA and like it. It’s about how do we reach those that may have a good perception of the brand but need a new reason to visit.”

The events have been a hit. The Oprah event in Atlanta last year attracted 250 consumers. And, IKEA has leveraged its collaboration with Oprah to extend beyond online and in-store events. For example, last year Oprah’s resident life coach Martha Beck became part of IKEA’s lifeimprovementproject.com sweepstakes that offered $100,000 and three personalized sessions with Beck. And it got bigger: IKEA was the exclusive furniture sponsor of Oprah’s annual O University event where Oprah conducts life improvement seminars with all her experts. More than 5,000 people attended the Atlanta event in October last year, and it was entirely furnished with IKEA furniture. This year, the concept for the seminars remains the same but has been renamed the Life Improvement: Home Truths Event (MEC Global, New York City, handled).

Although IKEA’s main objective isn’t to sell on the spot at the in-store events—“It’s not necessarily about that day in particular,” Kemet says. “It’s about creating a space in consumers’ lives, so they think of IKEA as a place that can provide solutions for them, similarly to these media outlets that they trust”—its sales and website traffic have increased giving the brand at least a couple reasons to continue the program into 2012.

The last two years of the program have also taught IKEA some tactical lessons it plans to implement this year. “You need the time to perfect the logistics, and when you’re worried about too many different collaborators, you’re starting over every time. We would like to get tighter with our ideas and planning,” says Kemet. “We want to do even more workshops around the things research tells us our customers really want to know more about.”

We can smell the cinnamon rolls now. EM