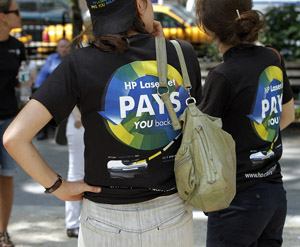 As part of its HP LaserJet Pays You Back global marketing campaign, entrepreneur and heiress Ivanka Trump and “The Apprentice” winner Bill Rancic on June 24 hosted an HP Payback event in New York City.

People crowded around a stage in Madison Square Park where the duo appeared, along with the LaserJet printer. They posed for pictures, spoke a few words in praise of the printer, chatted with fans and handed out $10 American Express gift checks, all to reinforce the “payback” theme. According to HP, the printer’s cost savings can amount to up to $2,500 in less than one year.

“With the Pays You Back campaign, HP is getting more ‘high touch’ than with any other campaign in the LaserJet brand’s 25 year-plus history,” Ken Fleming, director of marketing, LaserJet and Enterprise Solutions at HP, told Buzz. “This event enabled HP to connect with our customers on a personal level and powerfully demonstrate the surprising and incredible costs savings of the HP LaserJet printer.”

The campaign also includes viral conversations on Boing Boing, The Business Insider and other blogs, as well as Twitter and Facebook posts. The company also is encouraging IT decision makers to expand how they think about ROI by offering inspiring stories and inviting them to share their own personal experiences of finding ROI in surprising places on sites like cio.com and computerworld.com. These stories will feed into HP’s banner ads. Agency: Porter Novelli, San Francisco.