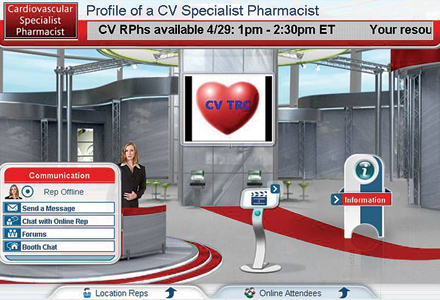 Health care company Medco generally spends about $3,000 per person at its annual 800-attendee sales conference, which brings together three of its markets—employer accounts, key accounts and health plans—for training and networking opportunities. But in 2009, when the unsettling economy caused companies to tighten their belts and Medco’s customers to cut travel budgets, its remedy was a virtual conference, the 2009 Market Group Virtual World (Unisfair, Menlo Park, CA, handled). The cost: a mere $62.41 per person. Medco’s change of venue generated savings of more than $1.5 million on travel, A/V, ballroom and conference spaces and catering.

“We needed to find a method of communicating information out to the masses without anyone incurring traveling costs,” says Mary Rose Wild, senior director-Center for Learning and Organization Effectiveness at Medco Health Solutions. “The virtual world accomplished that.”

Instead of three jam-packed days generally allocated for the physical event, the virtual conference was spread out across five days with two to three hours of programming a day, which lent itself better to people learning from their desktops. Attendee feedback showed that people liked the flexibility of the virtual world, which allowed them to access training without disrupting their day-to-day business. They could log off during the day to connect with their clients and then log back in when it was most convenient with videos, content and other materials available on demand 30 days after the live sessions. The virtual environment also proved a useful tool to track attendee engagement. Attendees engaged in more than 1,100 chats, downloaded more than 4,700 files and 95 percent said they had the information they needed to better position Medco against competitors.

As for networking, there was still no substitute for the real thing. “Though we tried to recreate as much as possible the opportunity for peer-to-peer interaction [via real-time chat rooms], it’s simply not the same as going to a bar at the end of the day and sharing drinks with your colleagues that you have not seen for nine months,” says Wild, who advocates a “blended” approach of alternating annually between the physical and virtual worlds. “What we have found as an organization is that there’s still a lot of value to bringing people on site when it makes sense for us to do so. But if we can’t do so, we have a nice alternative that allows us to still get information out to folks.”