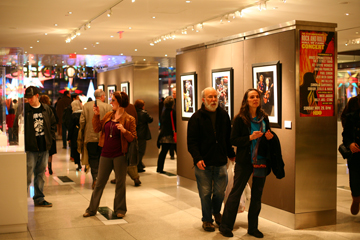 To promote its Nov. 29 four-hour airing of the 25th Anniversary Rock and Roll Hall of Fame concert which was recently held in Madison Square Garden HBO set up its own hall of fame in the busy Time Warner Center 10 days prior to the show.

The exhibit included 27 framed and mounted photos taken during the concert by rock and roll photographer Kevin Mazur. In addition it featured rock memorabilia like a handwritten set list by B.B. King and the denim vest worn by Bruce Springsteen during his U.S. tour.

“The concert had so many different performers so we thought it would be very special to provide music fans with something additional ” Sandy Ortiz manager-consumer marketing and advertising at HBO told Buzz. “The objective is about tune in to a great concert on HBO but it’s also a thank you to consumers that are rock and roll fans.”

To spread buzz about the exhibit and drive additional tune in for the show HBO dispersed street teams in branded hats to hand out info postcards at hotspots like subway stations leading to the Time Warner Center as well as outside music stores like Guitar Center and at the Rock and Roll Hall of Fame Annex in SoHo. Agency: Grand Central Marketing New York City.