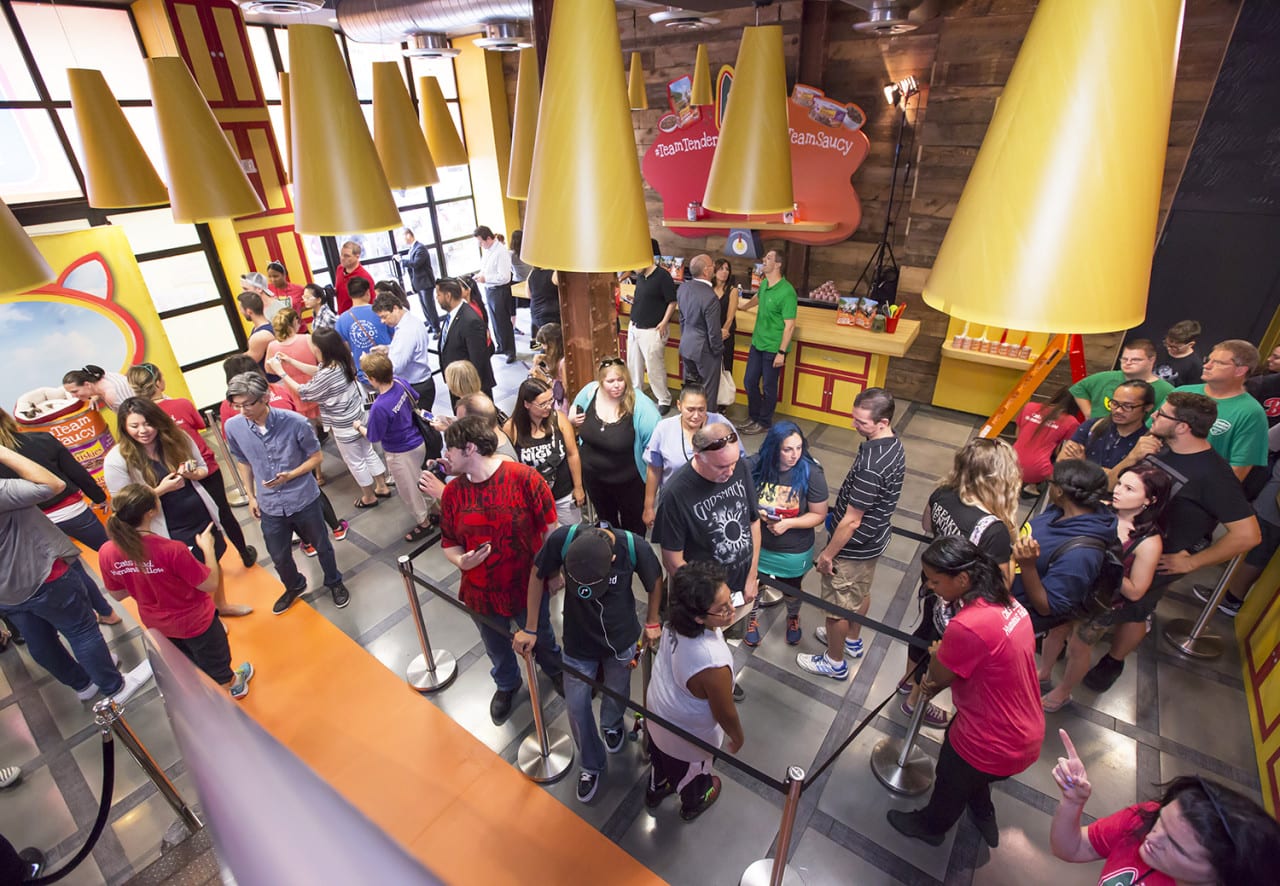 Here’s how it worked: Each cat represented a hashtag and Friskies product. Consumers were encouraged to post about which “team” they were on—along with that team’s hashtag. Leading #TeamSaucy and Friskies SauceSations canned food was “notorious curmudgeon” Grumpy Cat. Leading #TeamTender was “sweet” Nala Cat representing the Friskies Grillers with Meaty Tenders dry food.

Consumers could take selfies with the cats (perched on pedestals that looked like stacked cat food cans) during set times throughout the daylong event. Cat lover and WWE Diva Natalya also made appearances. There were games such as branded Plinko and a prize search in a ball pit, the results from which triggered donations of Friskies meals to shelters. Brand ambassadors kept track of wins associated with each game and “team” on a scoreboard behind a counter top.

As an added sweet bonus, there was an ice cream station featuring “tender,” “crunchy” or “saucy” toppings. In addition, Friskies partnered with PetFinder to showcase adoptable shelter cats in the Friskies Create & Taste Kitchen. The cats were located in a quiet corner of the event space alongside a gallery of their names and descriptions. Design accents such as succulents and other greenery, bright colors and products dotted the space.

Consumers unable to attend the event could still help shelter cats by sharing whether their cat was on #TeamSaucy or #TeamTender. Every use of the hashtags on Twitter and Instagram through Aug. 24 triggered a donation—up to 10,000 meals. To build buzz for the event, Friskies offered a two-day preview of the space: on Aug. 18 and 19, passersby could get a glimpse into the kitchen through peepholes in the storefront window signage (including a peek at the shelter cats playing and resting in their housing pod). A virtual Friskies Create & Taste Kitchen experience is offered at friskies.com/friskieskitchen.

“At Friskies we really pride ourselves on not only loving cats but truly understanding them and their unique personalities,” says Whitney Evans, assistant brand manager at Friskies. “So this event is about personalities, preferences and positioning our brand as one that truly knows and loves cats, and driving awareness and trial of these two products.” Agency: The Taylor Group, Allied Experiential; both of New York City.