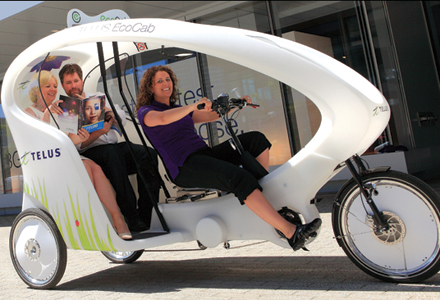 If you are ready to turn over the keys to that fleet of gas guzzling shuttle buses at your next event, you’re not alone. For the third year in a row, asset management company Janus Capital Group has used pedicabs to transport athletes and their families during the annual New York City Triathlon held the third week in July. The company sets up transportation stations where families can hop on after the athletes start the race and get dropped off at the finish line. Then the athletes get a lift after the final stage of the race instead of having to walk an extra mile and a half back. The program started with 28 branded pedicabs, increased to 32 the second year and 38 vehicles this year (Creative Strategies Group, Denver, CO, handled).

“Being in New York City, we didn’t want to cause any more auto smog, so using the pedicabs made sense rather than getting a bus,” says Christina Climaco, assistant manager-events and corporate sponsorships at Janus. Logistics are the only challenge, she adds, explaining that Janus sticks to New York City police-specified routes. However, the success of the program has given the pedicabs the freedom to veer off to take shorter distances during traffic jams. Laws also require pedicab drivers to be licensed, but that’s handled by the vehicle provider, in this case Denver, CO-based Main Street Pedicabs. An added bonus is that pedicabs stand out when in a group, since it’s unusual for NYC pedicabs to ride together. What other eco-friendly vehicles can produce that perfect blend of street marketing and consumer engagement? We propose three more to get you started:

ECOCAB
Owned and operated by Toronto-based GO Mobile Media, the EcoCab is as green as it gets. The futuristic looking vehicle seats two adults and a child and is manned by professional brand ambassadors with room to store product for sampling. It’s made entirely from recycled materials, such as plastic water bottles and cell phone cases. It’s pedal-powered with a rechargeable battery assist for hills and sharp turns when a bit more speed is required. In the works are solar panels for the top of the cabs to capture energy during the day that will power up the battery during night shifts. The EcoCab program has been a success in Toronto and New York with free rides paid by corporate sponsors who get their brand message wrapped all over the vehicles. There are plans for additional home bases throughout North America, but in the meantime companies can use the Eco2Go program, which consists of EcoCabs zipped inside a trailer with a team of drivers deployed to an event anywhere in the country.

SMART CAR
When Lancaster, MA-based Turtle Transit tricked out Smart Cars to resemble a school of piranhas, the buzz was on. They weren’t used for transportation, but rather to promote the April 25 second season premiere of Animal Planet’s “River Monsters.” But a fleet of branded Smart Cars for transportation purposes is also an environmentally conscious choice. The vehicle seats two people, and like the pedicabs, maneuver well in busy environments. The Smart Car is the most fuel-efficient, non-hybrid gasoline powered vehicle on sale in the U.S. at an EPA-estimated 41 mpg highway. According to smartusa.com, the Smart fortwo model is about half the length of the average vehicle in the U.S., saving about eight feet in length. The vehicles are also small enough that a fairly large fleet can be transported in a single trailer cross-country. In fact, if every U.S. car were a Smart, it would free up 24,242 miles of roadway.

MINI COOPER
The modern-day BMW version of the iconic 1960’s British Mini Cooper is bound to impress attendees. Rated a 2010 Top 10 Green Car by car resource guide Kelley Blue Book, the Mini seats four people and gets 25 mpg in the city; 33 on the highway. Though not as small as an EcoCab or Smart Car, it’s still unconventional enough that it stands out among the rest. For the grand opening of Shoe Woo’s new location in Manhattan, Turtle Transit transformed a Mini into the “Woomobile” featuring a four-foot custom stiletto mounted atop the car. Using Twitter, consumers were challenged with tracking down the whimsical vehicle to win a gift card.   EM