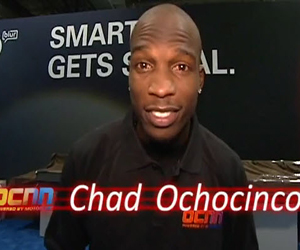 To promote its Motoblur social networking technology to football fans during the Super Bowl last month, Motorola teamed up with Chad Johnson (a.k.a. “Chad Ocho Cinco”), a wide receiver for the Cincinnati Bengals, to create the online, athlete-run sports news network OCNN, the Ocho Cinco News Network. Ocho Cinco started engaging fans via Twitter when football season started last October. In February, OCNN came to life with its own news desk on the Super Bowl’s famed Radio Row where the mainstream sports media sets up to cover the tournament. In addition, Ocho Cinco and his news crew (also footballers) hit the streets in a branded news van to interact with fans. At the NFL’s media day, he stood up and asked a question like an official reporter, which turned OCNN into the big sidebar story of the game. During the five days that the website was running, it saw more than 36,000 unique visitors and received approximately 250 million media impressions.

“Radio Row allowed us easy access to media, so we could promote the fact that our Motoblur technology is at the center of how the OCNN news team covers and shares the stories from Super Bowl week,” Jean Pierre Le Cannellier, senior director-North American marketing at Motorola, told Buzz. “It also provided our team of reporters access to big names who are always spotted in that area, which was critical for the stories and interviews we were sharing with fans.”

In addition to Ocho Cinco’s tweeting, Motorola drove traffic to the website and promoted its sponsorship with a 3D building projection on bustling Ocean Drive in Miami. The eye-grabbing 3D illusion seemed to peek inside each of the rooms at the Edison Hotel with thought bubble-style messages from a live Twitter feed showing fans’ Super Bowl predictions. The projection tied it all back to the company’s Super Bowl sponsorship. Motorola estimates that the projection touched at least 250,000 consumers. Agencies: Cake, New York City; Fleishman Hillard, Chicago; Genesco Sports, New York City; Leader Enterprises, Los Angeles.