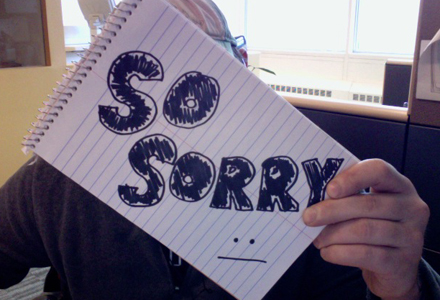 In this monthly series, EM brings you tips and tricks from pros and experts who’ve been eating social media marketing for breakfast. So eat up, and check us out on Twitter @eventmarketer and Facebook.com/eventmarketer for more.

Last year, we saw some of the most exciting moments in social media’s history, proving the platform’s worth to brands, freedom fighters and political action committees. But it wasn’t all high points. Last year we saw some of the biggest bombs and screw ups we’ve ever seen. Some were so off-key we kinda thought they were hoaxes at the time. Sadly, they weren’t. We have a full roundup coming in the next issue, but here’s a little taste.

Offender: Kenneth Cole
Offense: When this über-cool fashion brand saw the massive upswell of support on Twitter for the protesters in Egypt at the beginning of the Arab Spring, one of the social media coordinators clearly forgot the nature of the medium when he tweeted, “Millions are in uproar in #Cairo. Rumor is they heard our new spring collection is now available online –KC” with a link to the website. Not only did he make light of the struggle, he pissed off the entire twitterverse.
Result: The brand apologized, which was smart, but it didn’t do enough to calm the madding crowd. Angry and hilarious tweeters launched a hashtag urging a boycott of the brand and a new meme mocking the brand’s inept post.
Best practice: Think before you tweet. You aren’t funny enough to pull this kind of thing off. And perhaps you should think about whether you want to even try.

Offenders: Hubspot and Gap Offenses: Following Superstorm Sandy, Hubspot tried to be helpful with its post: “Five Hurricane Sandy Newsjacks from Marketers,” which outlined how marketers could insert their brands into storm coverage. It instead unleashed a storm of furious tweets. Gap’s social media managers incited the wrath of the social sphere when they tweeted, “All impacted by #Sandy, stay safe! We’ll be doing lots of Gap.com shopping today. How about you?” Impacted folks went to shelters instead of the Gap.
Results: Both brands apologized.
Best practices: Unless you have a practical solution or concrete help to offer beleaguered consumers, natural disasters should probably not be looked upon as marketing opportunities. Seriously, people.

Offender: Ragu Offense: In an ill-conceived attempt to be funny, Ragu sent prominent male foodie bloggers Twitter @replys attempting to seduce them. Instead the brand insulted them by asking, “Do your kids like it when you make dinner?” with a link to a video of mothers complaining about fathers in the kitchen.
Result: Hardly came off as funny. The bloggers, instead of promoting Ragu for free, instead told their followers and readers that Ragu was a spam brand and hated dads. Whoops. Best practice: Again. You are not funny. Comedy is an art, and not an easy one to achieve, especially on social media. If there’s any doubt about the joke, don’t make it.

Offender: Nestlé
Offense: Nestlé announced a new partnership with a palm oil vendor. Seems pretty innocuous, but Greenpeace got excited because it had accused the vendor of being responsible for rainforest losses in Indonesia. The brand’s Facebook page was inundated with posts criticizing Nestlé , the vendor, the partnership and everything any of them stood for, led mostly by Greenpeace itself. After some time dealing with the caustic attacks, one page manager got snarky with the fans and posted, “Thanks for the lesson in manners. Consider yourself embraced.”
Result: Nestlé ended its relationship with the vendor and the admin got famous. In exactly the wrong way.
Best practice: Take a break. Sometimes the fit is going to hit the shan, and it’ll be tough for a while. It’s easy and understandable to get overwhelmed, but take a step back and know it’ll blow over.

Offenders: Mutual of Omaha and Kmart
Offenses: To be fair, these were both probably accidents, but still. Mutual of Omaha promoted a tweet reminding people to purchase life insurance for their families at the height of the breaking news about the Sandy Hook tragedy, and Kmart attempted to send a condolence tweet, but forgot to remove the hashtag for a toy promotion.
Results: No one was impressed.
Best practices: Much like a natural disaster, tragedy is not the time for promoting yourself. Better to stay silent. If you must say something make damn sure you’re being sincere, and not coming off as a jerk. For reference, see Wheaton’s Law.

Superstars: The Red Cross
The mistake: A staffer accidentally posted a tweet from the Red Cross Twitter hashtag (versus her personal hashtag) about finding some beers, along with the hashtag #gettinslizzard. Twitter gets all upset.
Recovery of the Year: Red Cross sees the tweet and the responses, and tweets out that they’re making sure the #gettinslizzard is happening safely, and turns the whole thing into a successful blood drive by asking for help getting non-intoxicated blood, proving that funny done right is social media gold. Let’s all be safe out there, folks.