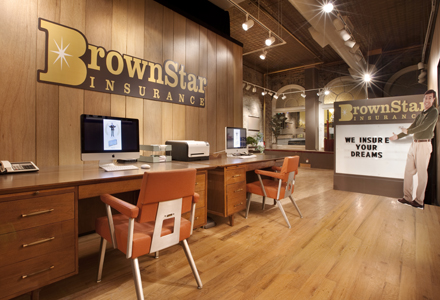 To create awareness for “Cedar Rapids,” a new film that opens on Feb. 11, producer Fox Searchlight at the Sundance Film Festival created a pop-up “insurance” agency inspired by the film that for four days offered festivalgoers, the press and general public a respite from the cold with free WiFi, hot beverages and other perks.

The activation transformed a Park City art gallery into Brown Star Insurance, the agency in the film in which actor Ed Helms plays the role of agent Tim Lippe. The pop-up captured the feel of the movie with dated wood paneling and other props used in the film. In the lounge area, attendees could spin a prize wheel to win useful Brown Star- or Cedar Rapids-branded items to ward off the cold temperatures outside such as puffy vests, beanies, long-sleeved t-shirts, hand-warmers and “Tim Lippe” lip balm. They also could create branded lanyards personalized with their photo that offered “insurance” against mishaps inspired by the film such as “protection against naked man hugs,” a “cougar” protection plan and STD insurance.

Preliminary groundwork by Fox Searchlight also helped drive excitement for the film. The company mailed Brown Star Insurance 2011 calendars to the press covering Sundance that was similar in style to those sent to policyholders by actual agencies. It also sent out business cards from Tim Lippe. When people dialed the number they heard a message from Helms as the character. Targeted banner ads and local newspaper ads also spread the word that Brown Insurance was affiliated with “Cedar Rapids.” Agency: Precision Event Group, Los Angeles.