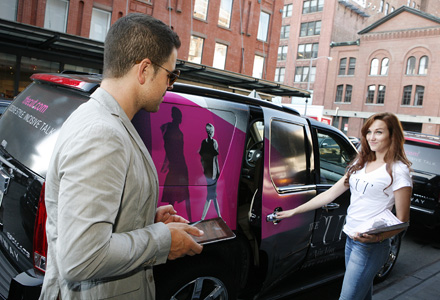 ‘The Cut’ Drives Fashionistas in Style

To drive awareness for The Cut, New York magazine’s fashion blog, the publication provided six SUVs to transport attendees at Fashion Week in New York City to and from downtown and uptown events.

Dubbed “The Cut Shuttle,” the wrapped, branded Cadillacs provided a stylish ride between the two major Fashion Week centers, Milk Studios and Lincoln Center, and served as a mobile billboard for The Cut, which in August re-launched as a standalone blog at thecut.com. The luxury fleet operated daily, Sept. 7 to 13, from noon to 8 p.m.

Inside the vehicles, guests received complimentary bottles of water, temporary tattoos and a green-braided bracelet with gold studs from online retailer Piperlime. They could also use on-board iPads to check out the blog. Promotional teams at Milk Studios and Lincoln Center distributed copies of New York magazine and copy cards that informed consumers about the transportation service.

A “Fashion, Forward” social media contest also tied in with the ride. Attendees who uploaded photos of The Cut Shuttle to Instagram received 10 entries in the sweepstakes, which in a random drawing awarded two all-access morning passes to Milk Studios, lunch for two at NoMad Restaurant and tickets to the J. Mendel show at Lincoln Center.

“We wanted to create awareness around The Cut, which has been around for some time but in August transitioned to a standalone website,” Sona Hacherian, executive director of creative and marketing services at New York magazine, told Buzz. “Its breadth and scope have increased dramatically.” Agency: Grand Central Marketing, New York City.