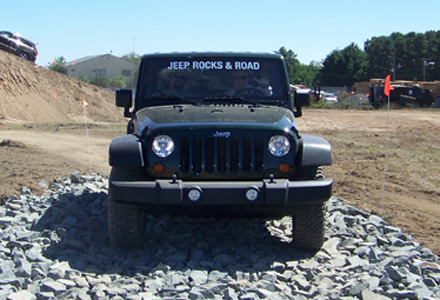 Ride and Drives Make a Comeback

Coming off the worst year ever, carmakers last year rolled out that oldie but goodie—the ride and drive—to remind consumers how much fun driving really is. But rather than rely on the same models and tactics they used before the recession, auto brands amped up their programs to give consumers much more than a quick tour of the track and a whiff of new car smell. In 2010, the auto industry gave the old standby a large-scale makeover, and EM was there to check it out.

Jeep Rocks and Road
Jeep hit 16 markets last year with a full-tilt, off-road adventure in the guise of a ride and drive program. The Rocks and Road tour, handled by Auburn Hills, MI-based agency George P. Johnson, is a full-day experience that visited air shows, festivals and state fairs until October to show off the new off- and on-road vehicles in the 2011 lineup. Taking center stage was the 2011 Grand Cherokee, which features a plethora of new high-tech features to make highway driving safer and more fun, while taking off-road capabilities to the next level. Also on show were several of the four-door Wrangler Unlimited packages, including the top-of-the-line Rubicon.

To show off all of the vehicles’ capabilities, each stop featured two tracks: the road and the “ain’t-no-road here.” The on-road course showcased handling and turning radius to full effect, while subtly displaying Jeep’s little-recognized comfort and paved road fun potential. Off-road, the fun really started. Consumers chose either to be chauffeured through the course or to strap on a pair and get behind the wheel for some real driving. There were 30- to 40-degree side inclines to show off the stability and low center of gravity, significant gradients for the vehicles axle articulation to shine and, of course, the mountain, which rose at a 40-degree angle to about 30 feet high and shows the driver that the sky is not, in fact, the limit of Jeep’s capabilities.

After the drive, and before the adrenaline wore off, the attendees were set up in front of a social media kiosk (designed by Cincinatti-based n-Sixty), where they made a video about the experience to post directly to Facebook and sign up to receive an email copy for their own use. Other attractions included a climbing wall, soft-top speed challenge, a teeter-totter for drivers to try and level off (yes, in a Grand Cherokee, and no, not easy), and for the little Jeep-ers, a kid-sized course with electric-powered miniature Jeeps in which to tool around. No swag was for sale, but the Jeep museum showed off some of the best from the past and present for true fans to envy and covet to their hearts’ content.

“Jeep’s always been a brand where the lifestyle and experience are as important as the vehicles,” says Jennifer Applebee, event marketing manager at Jeep. “We wanted to take the best of Camp Jeep and get that experience out to a broader demographic and geographic area. We can’t get better brand ambassadors than our fans.”

Hyundai Sonata Uncensored
To support its 2011 Sonata SE, automaker Hyundai in August launched a Sonata Uncensored experience that traveled to 10 cities through mid-October. Consumers test drove the car against competing vehicles on a three- to five-minute closed course with a professional driver. Afterwards, they were encouraged to hang around under a large, white Hyundai-branded tent and share their thoughts about the Sonata with friends on Facebook and Twitter using iPads provided on-site.

The experience, which was housed in a retrofit shipping container for a raw, edgy effect, was an attempt to go beyond the vehicle and resonate with its consumers’ lifestyles. A partnership with Dwell magazine and architect Christopher Deam enhanced the space with Adirondack chairs for a low-key, “front porch” feel where attendees flipped through the magazine and sipped Starbucks coffee drinks.

“The goal of the Sonata Uncensored campaign is to allow customers to draw their own conclusions by participating in the Hyundai experience. With everything they can do at the event it becomes a complete experience and the more we can get them driving and telling their friends about Hyundai, the better,” says Monique Kumpis, experiential marketing & strategic alliances manager at Hyundai USA.

Ford Fiesta Lounge
Ford last summer began a series of Fiesta Lounges and test drives at hot spots, fairs, festivals and malls in Denver, Phoenix and Southern California to reintroduce itself to consumers and remind millennials that Ford is a sensible car brand and more than just trucks. The three lounges, one for each market area, continued to pop up until the end of November, sometimes staying open for up to two weeks at a time. At each lounge, Ford kept the focus on Fiesta’s technological bona fides, design innovation and fuel efficiency, all important to the 16- to 35-year-old target demographic group. The lounges were equipped with iPads for general web surfing and getting the details on Fiesta’s features, in addition to a simple data collection survey designed to identify possible buyers and opt-ins.

The ride and drive experience was all about the custom fun for consumers. When they got into the car, product specialists invited them to use Ford’s Sync technology to pair up their phones and/or music players with the Fiesta’s on board sound, phone and navigation systems so the ride and drive had each consumer’s custom soundtrack all set to go.

“The Fiesta Lounge allows us to target this consumer based on their passion points, but in a non-threatening environment so we can re-introduce the brand to markets that might not yet have our cars on the radar,” says Tom Grill, US Western market area sales and marketing manager at Ford. “With mass media, it’s very difficult to get a consumer familiar with this car, but with these ride and drives, it helps them get the feeling you can’t get without the experience” (Agency: RMD Group, Bellflower, CA).

Many stops featured live music as a part of the Gimme the Gig promotion, where local musicians got a chance to audition for big name music producer Don Was, and other stops featured the brand’s partnership with rally car driver Ken Block with t-shirt giveaways, signings and custom Ken Block sneakers.

Toyota Winter Dew Tour
Toyota, founding sponsor of the three-year-old Winter Dew Tour extreme sports championship, last December took fans for a ride with a shuttle service designed to showcase the brand’s all-wheel-drive Sienna minivan, as well as its SUVs Sequoia and Highlander, without detracting from the action. The tour ran Dec. 16 to 19, in Breckenridge, CO.

The shuttle was, of course, complementary for fans and media, and athletes got the added VI-Perk of a secret number to call for a pickup whenever they needed one. During the ride to an event from any of the host resorts or back again, passengers were invited to give up some data in order to register for a chance to win a pass to a host resort for the 2011-2012 season. Meanwhile, the vehicles’ full entertainment systems played custom Dew Tour promos and previews and the heavily trained on-board brand ambassador answered questions about the vehicle.

On site, the brand showcased itself by integrating a Tundra pickup truck into the course. It was parked at the base of a half-pipe, where snowboarding competitors ground a rail off the bed of the truck and took some time to chat with consumers and take some photos.

“It’s difficult on a mountain to integrate a product like a car so that consumers can enjoy it in an organic way,” says Paul Czaplicki, manager-engagement marketing at Toyota. “We’re not trying to sell cars directly with this, but affect mid- to upper-funnel brand opinion and consideration” (Agency: Podium Marketing and AMCI, Golden, CO).

Green Means Go
Exhibiting at the first of the U.S.-based auto shows in 2010, the New York International Auto Show, brands had to set the ride and drive bar high, while staying topical and meeting the challenge of severely limited space at New York City’s Javits Center. They did it by teaming up for the zero-emissions indoor track exhibit.

Only true non-emitting vehicles were allowed on the track because any exhaust would have forced the cars outside. So the brands with eco-savvy and an eye toward consumer wants and an electric-only solution brought their cars to the lower level of the center and took attendees for a ride. A simple data collect, including which vehicle guests were most interested in and a driver’s license check, put folks behind the wheel of the quietest ride most had ever had.

Though it was a multi-branded experience, those who were there stood out for their innovation and as the only real exciting interactive on that level of the show. Drivers could bring the cars and SUVs up to decent speeds on the straightaway and check the handling in the turns. Many attendees got in line several times to try out all the vehicle offerings, though smaller cars suffered by lacking a back seat for groups of two or more to ride together. Also, brand ambassadors had to keep careful watch on the juice meter, or else risk running out of watts mid-run. All in all, a great drive and worth the wait, especially for eco-conscious car lovers, a fast-growing consumer segment.