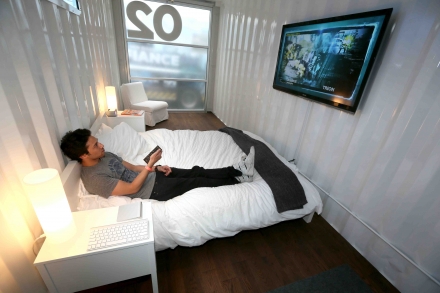 It’s springtime in Austin and that means the South by Southwest Interactive, Film and Music Festival is playing host to the hip, high-tech and influential. Your friends at EM are on the scene, and we’re going to bring you the intel on all the new interactive offerings you’ve got to know about this year (look for it in our April issue). But first, a little taste of some of the brand activations we loved.

Syfy
The preeminent television home for speculative fiction is getting ready to release in April its most ambitious offering ever: “Defiance.” It’s a show about a future Earth which has been ravaged by an alien invasion married to a cross-platform video game with the same plot elements, and many of the same characters. The hook? The two will inform each other, in real time. As events unfold on the show, features and plot twists will affect the game. And, as players of the game change and evolve the world around them, the show will be written to accommodate those changes. Boom! Syfy just blew your mind. To bring this heady entertainment franchise to life, the brand created the Defiance Container Village, where guests play the game, have some refreshments, catch some music and even live there (in one lucky blogger’s case) in a container hotel room, complete with all the amenities. It was coolest brand activation we saw at South-by this year. Agency: Subrosa, New York City; Social Media Integration: Naked Communications, New York City.

esurance
In its second year at SXSW, the online-born insurance provider set out to give the people what they want: help. So, at its footprint on the concourse of the Austin Convention Center—the epicenter of SXSW—the brand asked attendees to answer a few quick questions about why they came to South-by and, from the answers, created a daily suggested schedule for each participant. Once in the system, esurance sent every one of the thousands of people who took part a list of sessions, restaurants, concerts, films and other activities that might interest them. They each also got a custom QR code that could be swiped at the booth each day for a chance at one of 20 daily prizes like iPads, Beats by Dre gear and other high-end swag. It was all so sweet, it might be the first time anyone was happy to hang with an insurance guy before going to a movie. Agency: GMR Marketing, New Berlin, WI.