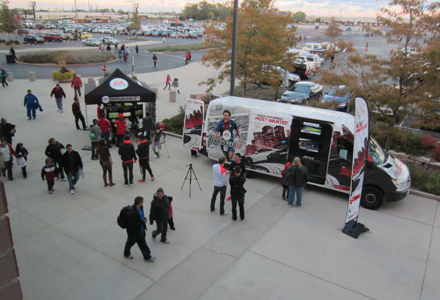 Electronic Arts on Sept. 22 kicked off its fourth annual FIFA mobile tour, this year with the addition of a second gaming title, a third mobile vehicle and an extended tour schedule. The EA Soccer & Speed Tour features the newest version of its soccer game, FIFA 13, and Need for Speed Most Wanted, a driving game with social components that enable players to compete against their friends. The nine-week program started in Chicago and will hit retail partners like Walmart and GameStop, college campuses, sports bars and sporting events in 65 cities including Dallas, Houston, Los Angeles, Miami, New York, Phoenix, San Antonio, San Diego and Washington D.C., through Nov. 25.

The tour travels in three 23-foot Sprinter vans wrapped in vibrant graphics from each of the games. The addition of the third van this year and the scalability of the footprint’s components enable the brand to execute more guerrilla events in more markets than in years past. The full footprint includes two ten-foot by ten-foot tents, 12 gaming consoles and three gaming consoles mounted on the exterior of the van (one 46-inch screen on the back and two 32-inch screens, one on each side). For special activations and launch events, the brand projects a looping promo video and live gameplay on a nearby building, creating a 35-foot projection.

At the events, staffers encourage consumers of all skill levels to try out the games. More advanced players can play in tournaments and take a stab at becoming a master of both games. Brackets are set up to reward those that play both games well and award prizes like Xbox Kinect sensors, t-shirts and one-month Xbox Live subscriptions to the top players.

“Research data revealed a high affinity among consumers purchasing FIFA and Need for Speed,” Ryan Hunt, senior product manager for Need for Speed at EA, told Buzz. “Because trial is paramount to sales conversion with our two products, we want to make sure consumers are getting hands-on experience first and foremost. The secondary objective is to build awareness as we head into launch with stops at retail stores, college campuses and sporting events.” Agency: rEvolution, Chicago.