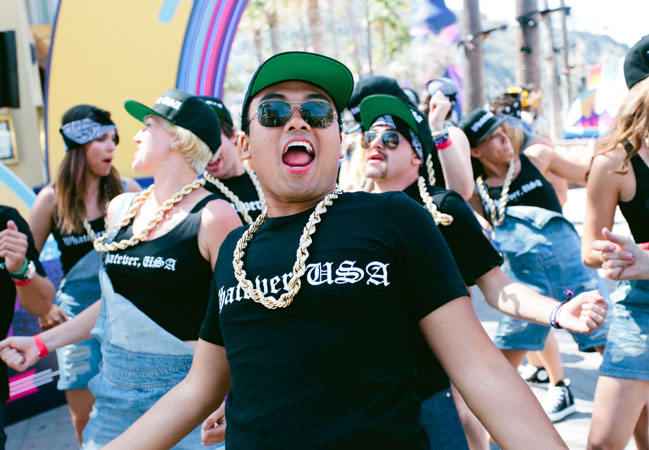 A year ago Bud Light announced it would turn Colorado’s Crested Butte into the fictitious Whatever, USA for a weekend in September. More than 240,000 millennials applied to get in via thousands of summer on-premise events and virtual auditions. Roughly 1,000 winners were selected to attend the weekend event in Crested Butte, where roads were repaved, merchants were rebranded and a weekend’s worth of activities was created. More than 1.8 million millennials engaged in the campaign. A five-year sales decline was cut in half over a few months.

When the program won Event Marketer’s 2015 Grand Ex Award for the best experiential marketing campaign of the year in May, it officially became the industry’s biggest poster child for big ROI-impacting brand experiences and ushered in the mainstream trend of using events to create content for the rest of the marketing mix, and event attendees as the primary creators and amplifiers of that content. “The event has become a content factory,” declared Bud Light vp Alex Lambrecht at our Experiential Marketing Summit in May.

A year later, the concept has grown, and evolved. A staggering 1.7 million consumers applied during the spring to get into this year’s Whatever, USA, which took over one million-sq.-ft. on Catalina Island. Whereas the first WUSA was used as a summer campaign finale in September, this year’s version  took place May 29-31 and was used to kick off the summer beer selling season (and Bud Light’s new Bucket List summer marketing campaign). The first WUSA go-around’s location was a secret. Even most Crested Butte residents didn’t know about it until the end, creating public friction between Bud Light and locals in the final weeks before the event. This time, Bud Light was transparent with Catalina Island’s residents in advance—there were four town hall meetings with residents, resulting in a frictionless partnership between brand and town.

“We’ve had the ability to refine what works and expand on that,” says Seth Gable, associate creative director at handling agency Mosaic.

From a design standpoint, the first WUSA look and feel was injected into Crested Butte—roads were paved blue, bars and merchants were given Bud Light-branded names, menus, merchandise and environments. This time, Bud Light took the classic art deco look and feel that Catalina Island is known for and blended the beer brand’s identity into the existing environment. (Merchants weren’t give new names but did receive some Bud Light graphic branding overlays.)

Friday night kicked off once again with a welcome parade and a procession (featuring performances from Elliphant and T-Pain) down the main promenade en route to the beach where Diplo performed. Attendees wore LED necklaces with buttons they pressed to “unlock” various experiences. At random vantage points, LED screens would provide experience choices (example: a 42-foot LED dragon, electro hula hoopers, light shows or a dance performance?) that were deployed once attendees themselves group-selected using the necklaces. There were eight such “unlocks” on Friday night.

The activities continued the next morning all around Catalina. This year’s agenda featured an increase of “active involvement” activities. Examples: Early morning hula hoop workouts, hiking for Bigfoot, seaside trampoline aerobics, pirate self “de-fence” classes, zip lining, a Snapchat digital art class, “tag-teaming” with professional graffiti artists. Last year’s Saturday night event featured a ’70s-style disco party. This year’s was a roaring ’20s-themed Great Gatsby-esque event in the Catalina Island casino. Guests once again received Saturday night wardrobes—like actors get primped on an ad set, Bud Light was making sure the characters that would star in millions of pieces of viral content looked nothing less than meticulous. Sunday featured a commencement speech by alum Lil Jon, more activities and then a departure.

There were also random surprises—last year Vanilla Ice pulled in driving an ice cream truck… this time it was Snoop Dogg with (what else?) a hot dog cart. Other elements included the return of the WUSA mobile app, selfie machines, full drone content coverage, and more. No private branded Bud Light planes this year—guests were brought to the island in ferries. Last time attendees stayed in one large Crested Butte hotel; this time it took 21 hotels to accommodate. Mosaic confirmed that more than 15 cities were considered for WUSA this year and that the initial list was whittled down to six and then three—one mountain location, one desert/Old West location and a beach location (Catalina).

The year-over-year numbers just continue to rise. More consumers auditioned to get into the town. Content capture was up. Sales increased. And initial social share metrics doubled from WUSA 1.0 to WUSA 2.0.