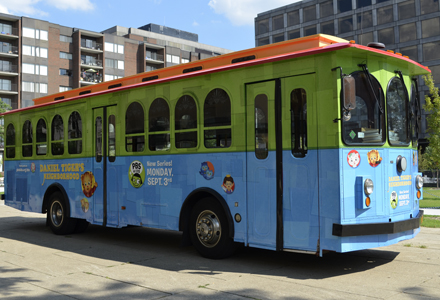 To promote “Daniel Tiger’s Neighborhood,” a new PBS series aimed at preschoolers, the network is bringing a 40-foot historic trolley to kid-friendly events and locations such as museums and zoos. The trolley is a throwback to “Mr. Rogers Neighborhood,” the iconic series that ran on the network for more than 40 years and is the inspiration for the new program.

“Daniel Tiger’s Neighborhood,” which is produced by The Fred Rogers Company, is an animated series that stars four-year-old Daniel Tiger, who is the son of the of the original program’s Daniel Striped Tiger. Building on the work of Mr. Rogers, Daniel Tiger invites young viewers into his world and gives them a “kids’-eye” view of his life, teaching them practical strategies and skills for growing and learning. The program premieres on Sept. 3 and will air daily.

A 40-foot road-ready trolley, branded with Daniel Tiger imagery, is the centerpiece of the tour. At each stop Daniel Tiger brand ambassadors distribute stickers based on the characters in the show and branded mini eight-ounce bottles of water. An on-board face painter paints the characters onto the children’s arms and faces.

The tour launched in mid-August in Pittsburgh, where the original program was produced, and is traveling to kid-centric spots such as the Pittsburgh and Washington, D.C. zoos, the Franklin Institute in Philadelphia, as well as beaches and tourist points. A smaller repurposed classic vending truck is traveling to smaller markets. (Agency: Encompass Media Group, New York City)