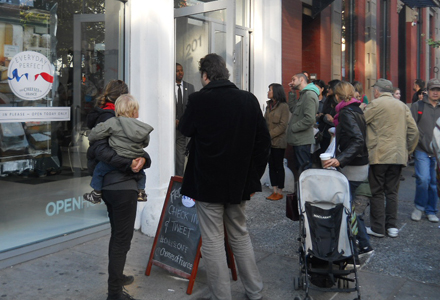 Openhouse Gallery on New York City’s Mulberry Street last week became a fromagerie of sorts, thanks to The Cheeses of France Marketing Council, a consortium of dairy farmers and cheese firms based in Paris, which transformed the space into a pop-up twitter café filled with cheese. The pop-up was the culmination of the council’s new marketing campaign, “Everyday Perfect,” which celebrates French cheese as part of an everyday diet.

The café opened to the press on Oct. 21 with cheese and spirit pairings and demonstrations by Top Chef contestant Ash Fulk who prepared American dishes such as grilled cheese sandwiches and macaroni and cheese with a French flair. On day two, the pop-up opened to the public, who sampled the cheese along with French Cotes du Rhone wine.

Five display cases held a bounty of Brie and other “fromages” for sampling and purchase at wholesale prices. People were encouraged to tweet from the venue, and their tweets were projected onto a wall in the room. A monitor behind the check-out area ran the campaign’s new advertising spot. A Facebook page also promoted the event.

“The café was the best way to reach our target directly and in a very user-friendly way,” Denise Navarro, promotions manager at The Cheeses of France Marketing Council, told Buzz. “The proof, 1,427 consumers came in a very short period of time. We wanted to create awareness about the large variety of cheeses of France that are available on the U.S. market and to present the many ways of consuming them. This was one of the best ways to give consumers the opportunity to look, touch, smell and taste the product and at no cost.” Agencies: Jaffe & Partners and Moderne Communications, New York City.