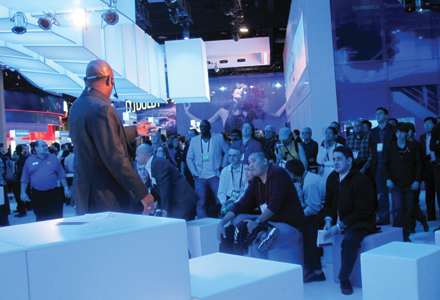 Anyone who has ever worked a trade show has seen his or her fair share of glassy-eyed corporate presenters, reciting their pre-rehearsed spiels along the aisle with plenty of energy and polish, but little in the way of genuine conviction. The presenters, who are often fed a script via an ear prompter and a micro cassette they control with a remote control in the palm of their hands, have been a trade-show standard for decades now. But their role is evolving as companies look for new ways to make more authentic connections with attendees.

These highly scripted presenters, mostly actors, have remained the norm in the industry because it’s hard for trade-show managers to risk using an unscripted emcee who might make a mistake. That’s changing though, as folks in the business are finding creative solutions, like mixing the professional presenters with the company’s own employees. Technology giant Intel put this new approach to work at this year’s Consumer Electronics Show in Las Vegas. The company and its staffing agency, Professional Staffing Services (PSS), trained corporate presenters sans ear prompters and had them interview Intel’s rock star engineers in a talk show-style setting on stage. The conversational tone worked like a charm (Agency: Lead Dog Marketing Group, New York City).

“I like to go with an authentic approach, so more and more we’re putting our employees on stage and we’re not doing the ear prompter because it’s insincere to me,” says Victor Torregroza, event program manager at Intel. “If you cannot get up there and speak sincerely about our product I’m not going to put you on stage.”

PSS president Keith Kilgannon says that all a company has to do to help their employees have that free flowing conversation is match them with a thoughtful questioner, someone who is responsible for the more showy aspects of things that can tease out the information in such a way that it makes them interesting.

Other staffing agencies are torn on the matter, but aren’t big fans of ear prompter presenters either. “There is no right answer. I have some presenters who love the ear prompt and others who cannot stand them. It goes both ways for the clients as well,” says Larry Hess, ceo-owner of Encore Nationwide. “For the presenters, it is a safety net, especially if they are patched into someone live who can answer a question. However, most of the really good presenters like to be up there alone without the prompter. It does give it a more realistic feel.”

Jennifer Hooker, director-account management at Attack! says, “Scripts are typically provided to presenters in advance so they can familiarize themselves with the brand and audience they’re speaking to. These speaking points, along with hours of practice, ultimately help presenters fully grasp what the intended purpose and outcome of the presentation is. This way, they can make the most of their pre-event time, learning the lines and infusing their own dynamic personality within the presentation.” She adds that ear prompters are almost always reserved for situations where prep time is limited.

In addition to about 16 hours of web training and videoconferences, intense face-to-face training is what made the difference for Intel’s staff at CES. For hired presenters, PSS created an “American Idol”-type format that required potential brand ambassadors and two main presenters (both with technology backgrounds) to audition in front of a panel that included Kilgannon, Torregroza and other marketing staff at Intel. This makes the staffers think about their role well ahead of the show and develop some performance anxiety. Once the team was picked, they trained via web and conference calls on Intel’s brand identity, strategy, technology and CES-specific messaging. Then the team arrived at CES three days before the show and locked themselves up in a room for two and half days to perfect the conversations.

As for Intel employees, Torregroza admits it’s not easy to get them on board, but the payoff is worth it. In addition to web training, Intel flew the employees to its corporate headquarters for a half-day training one month before the January show. “We normally wait until we get to the show the day before it opens but we wanted to make sure the employees got it,” says Torregroza. “December is a busy month, there’s the holidays, and we were gearing up for a massive trade show, and in the meantime all of the employees have fulltime jobs. At first people said they were too busy but they came through.”
Though industry veterans like Torregroza are driving the change, as he walked the CES show floor, he says there was no doubt that the majority of companies are still using ear prompts.

Shelly Justice, ceo at CMT (Convention Models Talent) says that there are only about 400 or so specialized actors that are trained on the ear prompter. One of the biggest advantages for hiring these people, she says, is that it allows companies to make last-minute changes to the script. “For the most part you’re hiring an actor with a background in some type of speech training or impromptu,” Justice says. “That actor can engage with a PowerPoint, they can have another actor or a presenter on stage doing a dual performance or a skit, even intertwining comedy with the message the company is trying to convey about their products. You can keep it professional or beef it up a little.” What Justice warns you should not do is put your employees up there alone if they’re not interesting enough.

As for last-minute changes, Intel and its team argue that if you have a smart presenter, making last-minute changes is no big deal. “The presenters we used were fantastic and they found it very freeing not to use the ear prompter, because they didn’t need to worry that if it wasn’t on the ear prompter they couldn’t answer something,” Torregroza says. “And I had at least five other people [on hand] if anything happened that could get up on stage and have that conversation without an ear piece.”
It’s a huge leap of faith for some companies still holding on to the prompter like a lifeline, says Kilgannon. “To say that you remove a script is to say you remove control,” he says. “And that’s been a hard part for an industry full of control freaks.”   EM