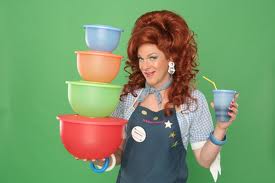 Part drag queen part sales pro and giver of a lot of off-color one-liners Miss Dixie Longate proves that entertainment value and marketing chops can not only fluff up a stale brand perception it can sustain enough word-of-mouth to push one savvy (and saucy) Tupperware saleswoman straight to the top. This year Dixie’s taking her show on the road with an off-Broadway production that adapts her in-home events for the stage. EM caught up with her to find out what keeps her in high demand. Some of these Dixie Tips may make you blush but ten bucks says by the time you’re done you’ll want to buy your own set of burping bowls.

JH: Good morning Dixie. Did I catch you before your coffee?
DL: Oh hooker no! I never have coffee. I just go for the hard stuff. Especially on a Monday after church. I mean you know. You have to have standards.

JH: A friend of mine went to one of your parties and ended up buying a whole bunch of Tupperware. You must be really good because he’s a total tightwad.
DL: Well you’re very sweet. I carry a hand gun and I think that helps. I don’t mean to make it feel forced but just buy the crap and shut up about it.

JH: How did you get into selling Tupperware?
DL: When I got out of prison I needed a job to get my kids back so my parole officer said why don’t you try selling Tupperware? Basically you get to drink for free at a party and for me that’s what roped me in.
JH: Tell me about your first event.
DL: I invited about ten of my friends over to my trailer but I said do me a favor and invite one person I don’t know. The people that wanted to book my parties that first day they were all people I had never met before. That got me out of my own personal circle of friends and that’s what’s kept the party chain going. It just took off and before I knew it I was doing parties all the time. In a little over a year I became the number one seller of Tupperware in the U.S. and Canada.
JH: Six years later and you’re still booking all over the country. What’s the secret?
DL: After all this time it’s still word of mouth; two or three people book a party from a party. I’m usually booked four to six months in advance which makes all the other Tupperware ladies pissed off. But you know what I try to help them. I want everyone to have an opportunity to leave the kids strapped to the front door of the trailer for a couple of hours while they go out and have fun.

JH: What makes your parties different than the Tupperware parties from 20 years ago?
DL: They’ve worked out all the bugs and details about how to make the products work and how to sell the stuff so my job is not to sell the products my job is to make the party fun. I don’t look at it as a Tupperware party I look at it as a Tupperware party. Nobody wants to sit there while you yell at them about plastic bowls and keeping their fruits and vegetables fresher. Nobody gives a crap. So what you need to do is make it fun and really interactive. The consumer needs to get up and touch it look at it and be able to imagine what you would do with it. A lot of the Tupperware ladies do raffles and games. Hooker as long as you’re making these things fun and not stupid as hell then you’re gonna be okay but oh lord! Nothin’ I hate more than somebody lookin’ at me and going “Hey let’s do a raffle where you’re going to win a stupid piece of crap that nobody cares about.” If you’re going to raffle stupid pieces of crap then give me something to drink along with it. Then everybody wins.
JH: What is it about small at-home events that gets people excited about your products?
DL: For me it’s about touching one person at a time. (Sometimes I touch two people at a time but that’s only at church.) I try to help people have fun so they are remembering little stories about my products. So when they are using a product they’re going to think “Oh my lord remember when we were at the Tupperware party and Dixie did this?” It’s great when you create an emotional experience and you’re tied into the product more than just buying it and sticking it in your home. To me it’s not just the Tupperware. It’s the experience.

JH: Is it also that you’re showing people new ways to use old things?
DL: Absolutely. For example I didn’t realize until about two years into selling Tupperware that it was for the kitchen. I thought it was for the bedroom. That’s when I really started learning and growing. We have a can opener that opens the cans with no sharp edges even if you’re all crippled up with carpal tunnel from downloading all the porn and stuff. With the sippy cup you can drink and drive without bustin’ shit up all over your dashboard when you get in a fender bender. And I have this cake taker where you can put cupcakes on one side or sheet cakes on the other side. Well I just put Jell-O shots on it when I’m going to church so I can transport ’em. For me that makes it so much more Christian and exciting. It’s about always talking about new and creative ways to use your Tupperware and thinking outside of the box.
JH: What’s the best part about your job?
DL: I’m constantly with these women and they’ve got married lives and great kids and everything but when you take them away from that element and you let them let their hair down and take their panties off and really talk and throw back a bottle of wine hooker you’re going to learn things about them and what they really need in their lives. That’s what’s great. I get to actually see people being what they want to be.

JH: Any interest in working in marketing?
DL: As far as being stuck behind a computer at a desk all day? That just kind of breaks my ass in half.

JH: Thanks Dixie. I hope to have a chance to buy some of your crap someday.
DL: Oh that would be neighborly. You’re so sweet Jessica. I could lick you up one side and down the other.