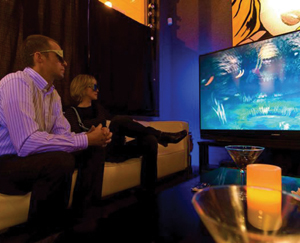 3D is making a comeback. The technology that had kids in ’50s cinemas wearing silly paper glasses as they watched “Man in the Dark” and “It Came from Outer Space” is back—and it’s better than ever. But let’s not give James Cameron and his hit movie “Avatar” all the credit. Brand marketers at Coca-Cola, Motorola, Visa and others are incorporating 3D into blockbuster events, too.

“3D is a marketer’s dream,” says Jason Lewin, director-marketing at American Paper Optics, a Memphis-based manufacturer of 3D glasses. “At a trade show, it’s been proven that someone is 78 percent more likely to watch a clip when handed a pair of 3D glasses than without. The great part is that the glasses are made of paper, so it’s low cost and high impact. The promoter puts their information on the side of the glasses and the potential client walks away with them in their pocket.”
Filmmaker Christopher Crescitelli, a 3D pioneer who for five years has been using the technology at live events, introduced the concept to marketers three years ago at a 3D lounge at the Sundance Film Festival. “We naturally see in 3D, so when we see 3D theater representations, our brain is really looking at that as something that is real, unlike a 2D image that you might walk right past,” he says.

Passersby in no way could ignore the eye-catching 3D illusion projected onto the Edison Hotel on Ocean Drive in Miami Beach at this year’s Super Bowl. Sponsored by Motorola and the NFL, the high-powered video projectors transformed the building’s art deco façade into a 3D peek inside the hotel where in-room vignettes took place. Twitter feeds about fan excitement and Super Bowl predictions appeared in word bubbles around the building’s “occupants,” who were portrayed interacting with each other in scenes of daily life. The effect replicated the contacts, posts, messages and photos from sources such as Facebook, MySpace and Twitter that the brand’s Motoblur technology delivers to live widgets for immediate reply, right from the device’s screen. During some of the heaviest foot traffic Ocean Drive has ever seen, the real-time Motoblur 3D projection touched at least one-quarter of a million people, with countless more online impressions.

“Ocean Drive is an architecturally driven community, as is the culture that surrounds this area,” says Jean Pierre Le Cannellier, senior director-North American marketing at Motorola Mobile Devices. “It was fitting to create something that not only leveraged this, but also enhanced it in a new way using Motoblur technology. The projection was a unique way to merge and stream real-time content from the online and offline worlds to enhance an event.”

Visa in February utilized 3D to reach three million commuters who passed by an eight-foot by 14-foot projection screen in an underground passageway beneath New York City’s Grand Central Terminal. Brand ambassadors distributed 3D glasses from 11:30 a.m. to 1:30 p.m. daily. At other times Olympic spots ran on the screen in 2D.

Designed to promote Visa’s Olympic Go World advertising effort, in which a consumer won a trip to the Olympic Winter Games for life, the 60-second 3D experience and accompanying 3D posters presented the campaign in a captivating way.

“An element of every campaign tries to engage the consumer, and that is what this is,” says David Lane, vp-digital media for CBS Outdoor. “This is what we bring to an area that is unexpected, that the audience will see for the first time, that draws them in and entertains them in a way that they’ve never seen before.”

Coke has been serving up 3D at events since 2006 with the first FIFA World Cup Trophy Tour. Fans were invited to view an inspirational 3D film charting the story of the FIFA World Cup shortly before having their photo taken with the real trophy.

“The film proved to be hugely popular with thousands of fans who visited our events, so we were keen to build on this success during the 2010 Trophy Tour,” says Souleymane Hamed, spokesman for Coca-Cola Sports & Entertainment Marketing. “Using the emotional power of FIFA World Cup footage, our latest 3D film aims to inspire fans to get into a celebratory mood and generate excitement before they have their photos taken with the trophy.”

The 3D film for this year’s Trophy Tour was inspired by the joyous dance celebrations familiar to Africa, especially African soccer. Using a mix of real 3D game footage and 3D computer animation, the film immerses viewers into the action.

Retail events are offering a taste of the 3D action, too. When Santa arrived in November at Bass Pro Shops across the U.S. and Canada, he asked the children in attendance to help him light the Christmas tree in the stores’ lobbies. The kids donned 3D glasses and when the lights came on, the tree was even more spectacular than usual. “People were clamoring for the glasses and had an ‘awe’ experience,” says Larry Whiteley, manager of communications at Bass Pro Shops. “And they were a souvenir of the special day when Santa arrived.”  EM