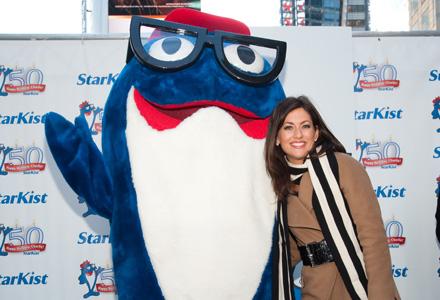 Charlie the Tuna on Feb. 11 celebrated his 50th birthday as the spokes-tuna for StarKist with games, giveaways and photo ops for consumers in New York’s Times Square. Jillian Harris, designer on ABC’s “Extreme Makeover: Home Edition” and “The Bachelorette,” co-hosted the festivities, which took place from 11 a.m. to 4 p.m.

The focal point of the event was an onstage game show in which participants competed in a series of birthday-themed challenges for a $500 prize. Fans also could make their best “fish-kiss” pucker, which was projected on to the Reuters Jumbotron. For every photo snapped, StarKist made a donation to the American Heart Association, which recommends that Americans eat two servings of fatty fish, like tuna, each week, to lower their risk of heart disease.

In addition, the confectionary crew at Carlos’ Bakery, from TLC’s show “Cake Boss,” presented Charlie with a commemorative cake. A representative from the AARP presented the tuna with an official membership card.

“Since Charlie plays such an important role in our company, we wanted to commemorate his 50th milestone in a special way,” Jennifer Albert, director of marketing at StarKist, told Buzz.