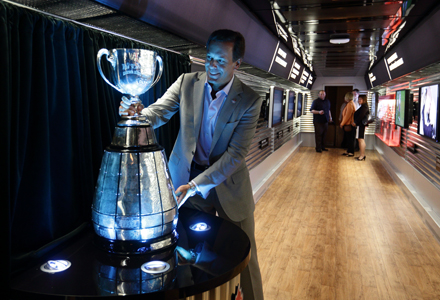 It’s been 100 years since the Canadian Football League first kicked off, and to celebrate, the league has sent out a cross-country branded Grey Cup 100 Tour Train to meet fans all across the Great White North and drive excitement for the fall season.

The 500-foot-long train has four activation cars, each with a different theme. Consumers first enter the museum car, where they learn the history of the CFL via a graphic timeline of significant moments from the past 100 years, exhibits of antique equipment and trophies, all supplied by the Canadian Football League Hall of Fame. Inside the Grey Cup car, the league features a photo activation with the actual Grey Cup. The pictures are delivered immediately via email so fans can share them on social media channels. Visitors also dig into some of the allure of the Cup via touch screen stations loaded with Cisco technology that allow them to investigate the details of the Cup, which is plated with the team names and players who’ve won the Cup throughout its history. “It’s been a profoundly personal thing for the fans,” Sara Moore, vp-marketing at the CFL, told Buzz. “It’s so beautiful to watch.”

Inside the team car, fans step into an immersive locker room designed to give them a behind-the-scenes experience (minus the smell, of course). The car is walled with lockers that feature players from the eight CFL teams. The car also features audio dialogue from past coaches and sports commentators with video highlight reels. The last stop is the hospitality car where fans can meet and get autographs with CFL Commissioner Mark Cohen and current and past players.

Outside the train, the league deploys an obstacle course, a penny press with the CFL logo and team cheer squads perform. As a bonus, the shavings from the penny press are being collected and at the end of the tour they will be forged into a “Fan Cup” that will be embossed with the names of every fan that pressed a penny. The Fan Cup will be displayed in the CFL Hall of Fame.

The tour kicked off on Sept. 7 in Vancouver and will visit 100 communities before it concludes on Nov. 25 in Toronto at the 100th Grey Cup game. To get some excitement building online, the tour is accompanied by a video blogger, who is posting daily from the road. The league has partnered with VIA Rail, CP Rail, Rona and Cisco to close the deal.

“It’s all about bringing the Cup to Canadians this year,” Moore told Buzz. “We’re in a great position of strength to celebrate the League. We’ve tried to bring to life the last 100 years of Canadian football and get new fans excited about the current stars.” Agencies: GMR Marketing, Toronto; Kubik, Toronto.