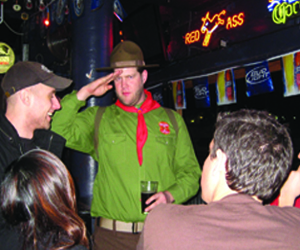 New Belgium Brewing Co. this month has unleashed a team of “beer rangers” clad in tan and olive uniforms who will appear in bars and retail outlets as well as in print ads and online games to introduce a new brew called Ranger IPA. Their mission: “To Protect. To Pour. To Partake.” Their get-up: a wide-brimmed hat, red kerchief, olive shirt and pants and tan gaiters.

The beer rangers are conscripted from the ranks of New Belgium’s 86 male and female sales reps. They will participate in on-premise events and promos, beer dinners where they will pair up with a chef and cook with the beers and “Tour de Fat,” an 11-city bike event sponsored by the brand. Additional “honorary” Rangers will be deputized at bar events by putting their head through a cut-out hole in a life-size Beer Ranger canvas for a souvenir photo.

An online component at newbelgium.com/rangerland includes a Ranger trio hip-hop video, an invitation to friend New Belgium on Facebook and a cut-and-paste “Ranger Yourself” function in which your headshot appears on a Ranger body.

“We started calling our sales folks ‘rangers’ back in 1995, but they never really had any physical trappings,” Bryan Simpson, director-p.r. at New Belgium, told Buzz. “We’ve given them a look and feel this time. It’s been a long time coming. They are pretty much the face in their market.” Agency: Cultivator Advertising & Design, Denver.