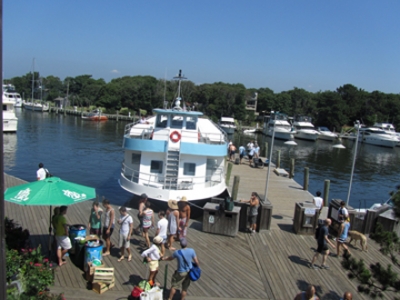 This summer, coconut water brand VitaCoco connected with LGBT consumers on New York’s Fire Island by sampling its original coconut water and new flavors like tangerine to vacationers (headed to the gay-friendly Pines resort area) as they stepped off the ferry. There are no cars on Fire Island, so the first thing consumers saw as they arrived and departed was VitaCoco’s hydration station.

The activation featured Brazilian flag-inspired colors with a neon green beach umbrella as the main draw and two “brand educators” singing along to upbeat music playing in the background. Wooden crates were arranged to appear off-kilter, which supported the casual island theme and reinforced the brand’s strategy of presenting the product in a manner that makes consumers feel like they’re discovering something exotic they can share with their peers.

“The appeal of Fire Island is that we’re interacting with LGBT early adopters that are in the world of fashion, music, theater, creative professions in general, but also on the more business corporate side,” Arthur Gallego, communications director at VitaCoco who handled the program, told Buzz. “You have a lot of successful people out there in real estate and some to a degree on Wall Street, and they’re all usually early adopters that could talk up the brand.”

Consumers could also grab VitaCoco at the handful of retailers on the island that prominently display the product as the island’s coconut water. Since starting the activation earlier this summer, the brand has been selling 150 cases a month—up from zero. For every case purchased consumers received a branded tote bag. The brand also did in-house product drops on request. Agency: Factory-360, New York City.