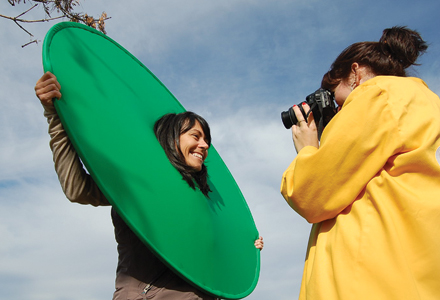 Photo marketing is a valuable tool for a variety of reasons. It’s an incentive to get consumers to interact with your brand, it captures data, it serves as a long-lasting memento and generally drives eyeballs to your website during the photo retrieval process. But what’s next on the horizon for photo marketing? Once that photo lands in the inbox or on the Facebook page, how can event marketers get the photo activation past the point of distribution? EM checked in with the experts to find out how they’re using photo marketing to inspire consumers to take action. Here’s a look at what many are doing, and a sneak peek at what they’re hoping to do more of in the future. Event marketers, take note:

Increasing Interactivity
One of the biggest contributors to an increase in interactivity with photo activations is the ubiquitous smartphone. “There are more than 300 million cell phone subscribers in the U.S., which is 96 percent of households,” says Gretchen Young, director-product management at Chicago-based eshots. “Everyone has the ability to take a photo when they want and share that via social media.” To help its clients capture a piece of the action, eshots has created a mobile phone app it calls “ushots,” which allows a consumer to take a picture with their own phone and then email that photo to a branded microsite where they have the option to customize it with branded frames and stickers and then share the final product online. Eshots has also launched “Digital Signage” which can’t be replicated by someone simply snapping a photo with their own phone. Using a green screen, the brand takes a photo and feeds it up to a large monitor display, like a Jumbotron in Times Square or at a football game. The only way consumers can have their photo broadcast on the big screen is if they give up their data during the photo-taking experience.

At Houston-based Catch the Moment, mobile phones are also playing a big role in letting consumers take more control of their photo experience by incorporating scavenger hunts into their photo marketing activations that extend the consumer interaction. When consumers retrieve their photos on their smartphones, the photo pops up with a QR code that, when activated, discloses a clue connected to a contest on-site. In addition to interacting with the consumer, the scavenger hunt is also a way for a brand to feed more information to consumers about its products by asking them multiple choice questions in order to get to the next clue. Folks that don’t have smartphones can use a short code that allows the consumer to receive the same information via MMS.

But these mobile phone activations aren’t possible if photo marketers are still uploading photos after the event. Speed is critical here, says Dmitriy Lobanov, founder and ceo of Atlanta-based Step Logic and eFilm Studio. “If somebody is taking my photo and then I go on the website with my iPhone, but the photo is not available because the website is not smartphone compatible, I won’t bother with it again,” says Lobanov. What’s also critical is making sure that the content that consumers are activating on their phones is mobile phone friendly, otherwise they’ll get discouraged and won’t engage with the activation any further. A second option is to bring iPad kiosks on-site where consumers can get their photo and share it on Facebook, Twitter and the like. But if they get to the kiosk and the photo isn’t there yet, that won’t work, either. Lobanov says that the consumers that come through his experiences get their photos in 30 seconds or less. This high-speed standard has increased their photo retrieval numbers significantly.

Driving Action
Photo activation can also be an effective tracking and sales conversion tool. For an AT&T program, Step Logic built a portal that gave consumers who retrieved their photo the option to purchase a ringtone. They could attach a free music file to the picture and then forward the image and the tune via email like a musical e-greeting card, and then purchase the ringtone via links on a banner wrapped around the photo. Step Logic tracked the ringtone downloads and AT&T tracked the purchases. More trackable action of this kind is being incorporated into photo activations. Richard Didow, ceo at Catch the Moment, says they can now send a photo to a brand’s Facebook fan page or send it to a consumer’s Facebook page. In addition to being shared, they can embed QR codes right on the photo, which keeps the action moving along as people share with friends. They can then be prompted by the brand to participate in a sweepstakes or be encouraged to “buy now” or receive a coupon, which can also be tracked.

For a year now eshots has been integrating photos with its product called “Rapid Response” which is an email service that pings the consumer to thank them and get their feedback once the photo has been retrieved and customized. There are dynamic content links in the email based on how they answer the questions in the survey. For example, they can get a quote, find a store or link to purchase the product they showed interest in. “We’re creating ways for a call to action in follow up to the photo. These links are able to prove ROI all the way to sales conversion from a photo being taken at an event,” Young says.

Changing Times
The once-standard retrieval card consumers generally get after taking their photo is slowly going out of style. They’re still around, photo marketers say, because brands like the idea of giving out a memento. However, they’re keeping track and discovering how little this does for higher retrieval numbers. Jean-Sébastien Lessard, president and ceo at Montreal-based Nomad Logic says that when he emails consumers their photo as opposed to using coded cards, the retrieval rates are about 70 percent. The cards, he says can become a burden to consumers because first they have to find it, punch in the web address, complete a questionnaire, put in the code and then get the picture. “We have done coded cards for clients that insisted on it, and to prove our point we volunteer to also email the photo,” says Lessard. “Using the coded cards only 40 percent of consumers retrieved the photo. After two weeks we emailed them the photos and the retrieval rates skyrocketed with 60 to 80 percent retrievals.”

There’s also a new type of competitor in the market, says Charles Lehosit, president at Atlanta-based Vein Systems. “We’re not competing with just vendors within our industry, but also with app builders like Instagram, a photo-sharing app, that makes aggregating photos from events easier than ever for consumers using their smartphones to take photos on-site,” he says. To fight back, he’s looking at also building apps that allow clients to plug into either a microsite or another type of online experience. “We look at these apps as competition for marketing dollars, but also as an opportunity. We prefer to build on popular apps and give marketers another way to plug into them rather than fight them,” he says.

Eshots is also in the process of launching a Facebook-based app that sends the consumer an email to retrieve or view their photo, which would then offer a link to publish to Facebook. Then a message prompts the consumer to allow access to their profile just like when they download a game or any other application on Facebook. If they agree, their photo gets published on Facebook with a link tying back to a customized event page. The photo is posted to the consumer’s wall and shows up in their news feed and at the same time the application pulls down pertinent data from their profile like name, birthday and gender.
“We’re seeing more of a need to give consumers the ability to share their photos directly to Facebook or Twitter instead of going through a retrieval or survey process, so allowing them to share through a brand’s application but also allowing them to take advantage of all the features Facebook has to offer, including profile data that can be pulled down in lieu of doing a survey, making the process less invasive and easier on the consumer and still achieving the objective of capturing a lead,” says Young.