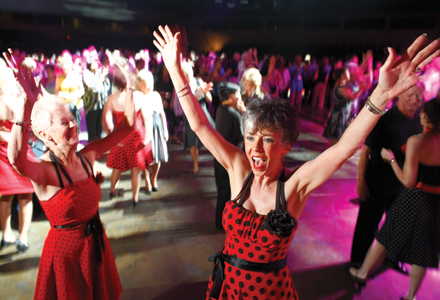 Late-night disco parties. Packed resume seminars. High-tech virtual experiences. The over-50 set doesn’t look like it used to, Sparky. Baby boomers (those born between 1946 and 1964) are not only looking younger and living longer, they’re working well into their retirement years, embracing modern technology and redefining what it means to age gracefully.

No one knows more about this generation than AARP, the Washington D.C.-based nonprofit organization that has been advocating and providing services for the over-50 set since 1958. Today, it has one of the largest memberships in the U.S.—about 39 million strong—and a portfolio of events that spans the U.S. and Puerto Rico, and for the first time this year, the far reaches of the internet, too.

AARP’s annual flagship event, AARP Life@50+, is filled with plusses for people aged 50 and above, including education, entertainment, exhibits and opportunities to network, make new friends, and maybe even find a job. The most recent, which took place in 2010 at the Orange County Convention Center in Orlando from Sept. 30 to Oct. 2, offered all that—more than 90 information sessions, a 400,000-square-foot exhibit floor, 350 sponsor booths—and, for the first time, one other very big plus: Orlando@50+ streamed the event live to those unable to attend in person. Virtual booths extended the live expo floor for six months, and most of the information sessions and celebrity presentations were archived and offered on demand for six months, too.

“Clearly, as we look out on our membership, we see an increased use of digital media,” says CB Wismar, vp-events at AARP. “So the effort this year in creating a digital experience was about offering this up to all of our members, so everyone has access to it, and not charge them for it, which I think is very critical.”

It was all to get the 50+ crowd motivated, inspired and educated around AARP’s overarching brand theme, Live Your Best Life, as well as build brand awareness and membership in the organization. UnitedHealth Group and Walgreens jumped in as platinum sponsors; Charles Schwab, Chase Credit Card Services, Dell, Allstate, Amtrak and Genworth Financial were among the 22 additional sponsors.

Wismar and his staff of 13, which includes specialists in housing and registration, sponsorships and event planning, manage AARP’s event portfolio, which includes programs targeting African-Americans and Latinos as well as regional events in Chicago, Los Angeles and Washington D.C. In Orlando, 3,000 volunteers provided additional help.

Technology was top of mind at Orlando@50+. On the exhibit floor Dell and HP demoed the latest in laptops. Dell sponsored a lounge where attendees checked email and interacted with new products. A giant NASA exhibit featured a mock-up of an astronaut suit, a 3D image of Mars and other space-themed displays. Exhibitors took turns on the Technology Stage giving presentations on digital photography, Facebook, Twitter, Google and smartphones.

AARP also introduced four new digital apps in Orlando—a new AARP app for iPhone and iPod touch and three separate apps for AARP The Magazine, AARP Bulletin and AARP Viva—and held sessions where the developers taught people how to use them.

The brand captured all the action on Facebook, a necessity for today’s socially networked boomers. According to 2010 data from the Pew Research Center, social networking among people ages 50 and up nearly doubled in 2010, and half of Internet users ages 50 to 64 and one in four users ages 65 and older now use social networking sites.

The show floor also offered more traditional and expected health and fitness, financial, home and garden, travel and leisure, retail and book pavilions, and of course, one for AARP, with stages spread throughout for special presentations. An expanded career fair presented lectures, career counseling and job search advice, internet workstations to search and apply for jobs online and connections with employers who were hiring.

At UHG’s booth, attendees received a Passport to Health & Well-Being that was stamped when they completed activities such as speaking to a staff member, watching a demo or getting a health screening. Those with four stamps received prizes such as a fan, a light-up pen or sun block.

Walgreens, a five-time AARP event sponsor, brought its traveling AARP/Walgreens Wellness mobile tour to the show floor where it screened 1,000 attendees for total cholesterol levels, blood pressure, bone density, glucose levels, waist circumference and body mass index and offered flu shots for $29.99. Attendees could have their photo taken against a mural of Universal Studios, an activity designed to remind them of Walgreens’ photo services.

But attendees also gave back. Those who brought nonperishable food items received a free one-day event pass. The food was donated to local food pantries of Second Harvest Food Bank of Florida.

A detailed registration system gives AARP a detailed picture of where attendees live, what they like and what they do. On-site, attendees wore barcoded badges that tracked which exhibits they visited. Exhibitors had the option of using coding machines to identify who attended their booth.

The result is an active database that receives a monthly AARP newsletter and other regular communication asking what they would like to see, do and hear, and issues that they feel are important, like what’s going to happen in Los Angeles this year, who are the speakers and the entertainment and… most important, what time the dance party begins.  EM