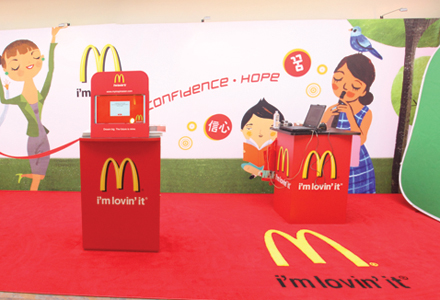 When McDonald’s launched its “I Am Asian” campaign nearly eight years ago with the Asian and Pacific Islander-targeted website i-am-asian.com, the program attempted to bridge American life with Asian culture by peppering the site with history, testimonials and activities that would inspire the demographic to pursue their passions and dreams with McDonald’s support through scholarships and local events. To bring that message to life, the brand took an activity and sampling experience called the Family Pavilion Tent to cultural events where it collected data and drove consumers online via photo activations. Online, the campaign received mixed reviews with some “lovin’ it” and others uncomfortable with what they perceived as false assumptions about the Asian culture. Multicultural programs that take all of the subtleties and nuances into consideration ain’t easy, folks. But McDonald’s kept at it, tweaking the program and continuing to connect face-to-face until it got it just right.

Since then, the brand’s Family Pavilion Tent program has continued to make its rounds while the campaign and website have evolved into the website myinspirasian.com, now in its third year. The new site harks back to its predecessor with a continued focus on helping Asian-Americans achieve their dreams through a nationwide education workshop series that McDonald’s organizes in conjunction with local leaders and schools. The program provides scholarship funds and support from Asian notables like golf pro Michelle Wii and others who appear as guest speakers at the events and offer their presence on the website. The inspiration for the education workshops, McDonald’s says, came from Asian-American consumers themselves.

“We wanted to bring the campaign to the next level after hearing from our Asian-Americans that when they grow up in the U.S. they don’t have a lot of role models they can look up to and that they would love to have this kind of mentorship established in their Asian communities,” says Vivian Chen, marketing director at McDonald’s USA, who is Chinese-American herself and points out how important it is for Asian-American youths to know that it’s okay to follow their dreams. “The overarching message is that McDonald’s provides opportunities for achievement and encourages its Asian-American consumers to pursue their passions and dreams.”

Last year, 25,000 consumers attended the workshops. The Family Pavilion Tent, which depending on the location includes a sampling truck, is also booming with an average of 20,000 people going through it at a one-day event. The tent visits a variety of Asian festivals and events including Chinese New Year and Diwali, and makes sure that in addition to its overarching message, it personalizes the experience for each consumer subculture just as it does on its website.

“If we go to Chinese New Year we’ll make sure the messaging is in Mandarin and that our brand ambassadors are bilingual because some people prefer to speak in their native language. That makes it easier to connect with the consumers,” says Chen. Her team also personalizes each event with symbols like chopsticks for Chinese New Year or Rangoli designs for Diwali. “The overarching messaging stays the same, which is about opportunity for achievement. Whether you’re Asian-Indian, Korean or Chinese, our consumer has told us that they’re passionate about education and this is an opportunity to tell them what we have available to help them succeed.”

McDonald’s also taps into social media, which is another passion point for this audience. It extends its message offsite with photo activations under the tent that can be downloaded on its website. “We know that they like social media and post their information and share their experiences with their friends so that’s also part of our strategy,” Chen says. To drive and track sales, McDonald’s hands out gift cards called the Arch Card and coupons (Agencies: IW Group, San Francisco; The Marketing Store, Lombard, IL).

Chen also points out how important working with franchisees is to the success of this program. “I work with a group of McDonald’s owner-operator franchisees who can be our checks and balances in helping us understand our consumers, because they’re managing their restaurants in the communities and know what’s most important to that particular consumer,” says Chen. “The key is to know what your consumers are passionate about. Fundamentally that should be the core, you should not be influenced by others and should be firm and understand exactly what you’re trying to accomplish.”  EM