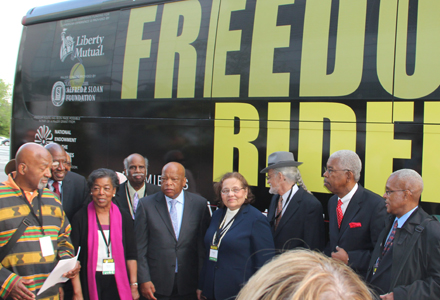 The Public Broadcasting Service launched the 10-day American Experience tour last month to promote Freedom Riders, a film about the group of people who, in 1961, used public transportation to challenge segregation in the South. The film and mobile tour celebrated the 50th anniversary of the historic ride. The tour, which ran May 6 to 16, retraced the original bus route from Washington, D.C. to New Orleans, making stops in Alabama, Georgia, Louisiana, Mississippi, North Carolina, South Carolina, Tennessee, and Virginia. The film premiered on PBS on May 16.

Forty college students, selected from 33 states based on essays they submitted on their reasons for wanting to participate, their thoughts on the role of social media and technology in civic engagement today, and their extracurricular activities, rode the bus. Also on board were filmmaker Stanley Nelson and original Freedom Riders Joan Mulholland, Rip Patton, Diane Nash, Jim Zwerg, Robert and Helen Singleton, Charles Person, C.T. Vivian, Bernard Lafayette, Catherine Burks-Brooks and Matthew Walker. The vehicle served as a moving classroom in which the students learned about the Civil Rights era and the individuals who took part in the first Freedom Rides. PBS also hoped the tour would launch a national conversation about the role of civic engagement in a democracy, explore why the students “got on the bus” and look at what civic engagement looks like today.

The students also met several modern civic leaders, including John Seigenthaler, former administrative assistant to Attorney General Robert F. Kennedy, who was sent to Alabama to deal with the violence directed against the Freedom Riders, and University of South Florida Professor Ray Arsenault, author of Freedom Riders: 1961 and the Struggle for Racial Justice, on which Nelson’s film is partially based. Along the way, the bus visited Atlanta’s Morehouse College with original Freedom Rider Bernard Lafayette; the Anniston Bus Station, the town where one of the buses was firebombed in 1961; and the Montgomery First Baptist Church in Alabama, where the original Freedom Riders, along with Martin Luther King, Jr. and 1,500 others, were trapped by a mob until the Kennedy Administration summoned federal marshals, marking a turning point in the civil rights movement.

“When we first screened the film at Sundance in 2010 for high school students, we saw the power of this story for them and realized that this recreation could be really powerful,” Lauren Prestileo, project manager at PBS, told Buzz. “We found this balance between the experience for the students and Freedom Riders on board and making sure we raised awareness for the film and online content.” Agency: Yardstick Partners, New York City.