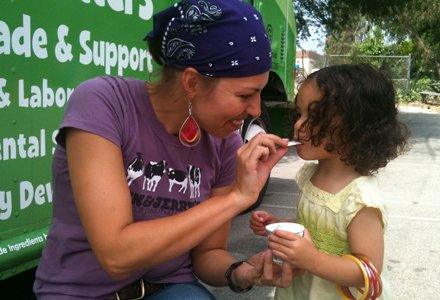 The Ben & Jerry’s ice cream truck is on tour again this summer, but with less of a focus on fixed events and more on personal requests via Twitter.  Touring since May, it’s currently taking requests in the New York market. Though Twitter is the main social media hub it’s using, Facebook, Foursquare, Flickr, Tumbler and others are also part of the strategy to connect with its target of professionals in their 20s (no worries, requests are open to all ages). It has also plastered its Twitter handle on the side of the truck to help spread the message as well as mounted a screen displaying Twitter feed.

“Last year we had four fixed events a week and on one day we asked people where they wanted us to go. The response was so positive that it evolved to where it’s really flexible and open based on the requests we get,” Jay Curley, integrated marketing manager at Ben & Jerry’s, told Buzz. “We’re looking to drive online conversation and word of mouth to keep the brand top of mind for people in these markets and ultimately increase sales as we did last year.”

This summer, the truck is going to one fixed event a week with four days open for social media requests, which vary from a one-person request to an office of 500 people. For large-group requests, the brand engages consumers with Ben & Jerry’s trivia, giving away prizes like branded sunglasses. In select markets, the team sets aside time to chip in and help local communities clean up parks, plant gardens and paint murals. Tasks made much easier when there’s ice cream involved. Agency: Gigunda Group, Manchester, NH.