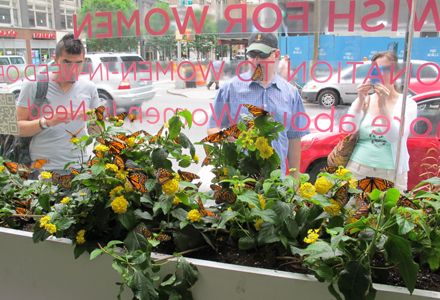 To introduce its ReStart Yogurt to women in New York City, Colombia-based dairy company Alpina created the multi-pronged Wishes for Women campaign. The program features the release of live butterflies representing wishes made for women as its centerpiece.

From June 6 to July 5, Alpina street teams canvassed the city in branded Nissan Cubes featuring custom-built coolers. Brand ambassadors distributed samples and handed out coupons that drove consumers to the brand’s Facebook and Twitter pages. Once on Facebook, they could download an app to receive additional information about the product. For the release of the butterflies, men and women were intercepted and asked to stand in front of a branded backdrop holding an origami envelope, and once they made a wish for women, they opened the envelope releasing a butterfly from inside. The moments were captured in a video posted on YouTube.

The live and online efforts mapped back to three branded storefronts on Park Avenue. In one display, there were live butterflies inside a temperature-appropriate environment. The second storefront was equipped with face recognition technology and a camera. As consumers passed by, digital butterflies were activated and landed on the person’s reflection. Then a countdown timer appeared and a picture was snapped producing a code consumers used to text to receive the image. The third window displayed a live Twitter feed of the wishes for women being made in real time. More than 100,000 people interacted with the windows (Inwindow Outdoor, New York City, handled).

“Our target of women in this daily struggle to do it all is in New York. The tension is stronger in New York so we thought that this woman would relate best to our campaign,” Korina Flushing, marketing manager at Alpina, told Buzz. “New York is also a great market in terms of volume for sales.” Agency: Vitro, San Diego.