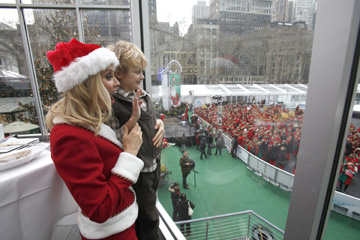 On Dec. 7 New York City’s Bryant Park looked as if Santa’s elves had invaded it. In actuality ABC Family set a new Guinness World Record for the most Santa elves (607 consumers in elf costumes) gathered in one place. The stunt was created to drive tune in for the network’s original movie “Santa Baby 2 Christmas Maybe” and 25 Days of Christmas programming.

“Every year we do a big marketing campaign for 25 Days of Christmas and event marketing has always been an important component of that marketing mix ” Danielle Mullin vp-marketing at ABC Family told Buzz. “We’re always trying to create opportunities for that kind of one-on-one connection with consumers that will really create buzz and drive tune in.”

To get people to join the fun ABC Family teamed up with local radio station Z100 which did radio promos the day before the event. On the day of the stunt the station was on site enticing folks to come down. The Pond at Bryant Park posted news of the event on their website and elf street teams at transportation hubs directed people to the event. The brand also communicated its message on Facebook and Twitter. To kick off the event Jenny McCarthy who stars in the movie appeared on “Good Morning America” where additional staffers dressed up as elves roamed among the crowds outside the studio handing out costumes.

At the event held from noon to 2 p.m. people signed up at the Guinness World Record logbook and received a costume to join a crowd at Bryant Park. An emcee set up on a stage kept the crowds entertained with games like wrapping contests and caroling and prize giveaways. At noon the elves were asked to gather and stay in the same spot for 10 minutes. Once the record was set Guinness presented McCarthy and Dean McDermott (also in the movie) with an official plaque. Participants walked away with ABC Family programming guides and a branded reusable shopping bag.

“The holiday time period is really great time for events ” added Mullin. “We feel like consumers are out and about feeling festive and enthusiastic about engaging in fun-filled activities like this one.” Agencies: Alloy Media + Marketing New York City;
AMP Agency Boston MA.