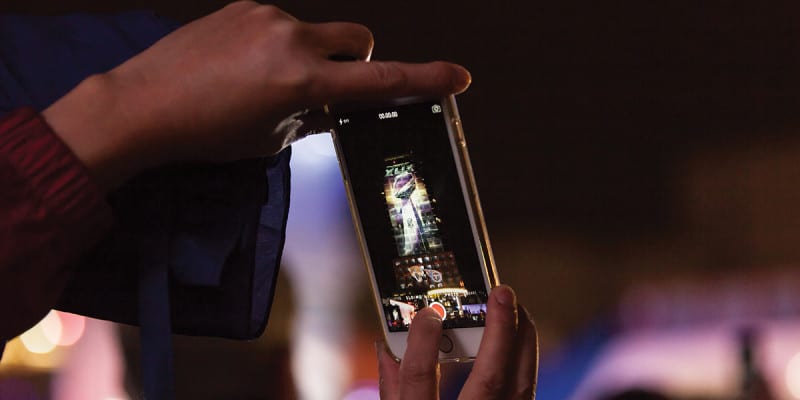 The Super Bowl is a perennially cluttered environment with major brands vying for share of mind among fans on-site and at home. For Super Bowl XLIX in Phoenix, Verizon re-activated and reinvented a successful strategy deployed for the previous year’s Super Bowl with a social media campaign that measured fan votes through a custom algorithm and converted them into a spectacular lightshow in downtown Phoenix. And it was all fueled by the same hashtag and call to action: #WhosGonnaWin.

All tweets, Instagram posts and comments on Facebook with the hashtag and reference to one of the Super Bowl teams were captured as a vote. The votes were counted and compared daily to reveal the team that had the most support revealing “WhoGonnaWin” through a dramatic lightshow. The collation of the votes could be refreshed daily to show how the game was heating up and how support was shifting between teams. Additionally, the votes could be broken down by time and location, leading to a series of engaging visual representations of data (a new part of the experience this year).

For four consecutive nights, two sides of the 200-foot-tall Bank of America building came to life in the lead-up to the Super Bowl with a projection mapping show. Fans gathered at the base of the building and soon these “watch parties” became a hot spot of increased dwell time and stronger brand attribution for Verizon. The show was also live-streamed on WhosGonnaWin.com and NFL Mobile, exclusively from Verizon.

In order to track the voting, the team developed a unique social media algorithm that tracked fan voting across Facebook, Twitter and Instagram. The algorithm tracked use of the campaign hashtag, combined with the fan sentiment, to determine which users were voting for what teams. In addition, the conversation was tracked geographically so that fans could see where votes for their favorite team were coming from in real time.

Verizon leveraged sports talent to generate buzz for the campaign, drive media attention and draw fans to the watch parties. A number of current and former players were enlisted from either existing endorsement deals or one-off deals for the Super Bowl in order to amplify the social media campaign even further and share the brand story.

It’s not every day that fans get to see their social engagement impact a larger-than-life experience, and ultimately, the campaign helped position Verizon as a technology leader. All told, there were 576,000 total votes on social, 50 percent mentioning Verizon. And there were over one million hits on whosgonnawin.com, 169.2 million earned impressions and 15,000 total viewers on the ground. #Wow.