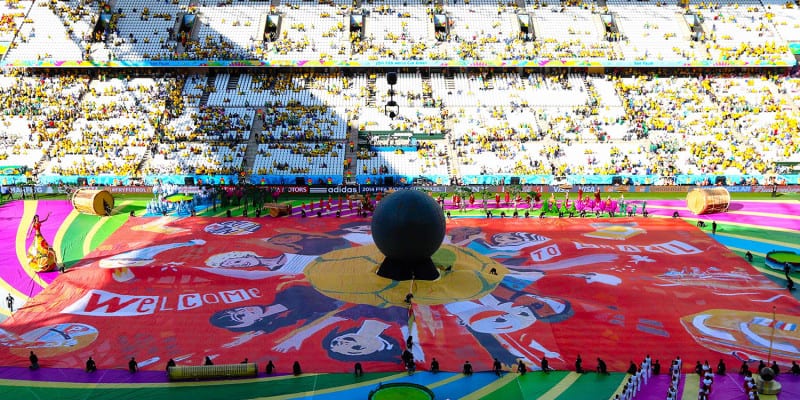 It’s a custom in soccer to present flags on the field or in the stands, typically representative of the teams or nations about to play. As an official sponsor of the FIFA World Cup, Coca-Cola’s marketing campaign around the 2014 FIFA World Cup Brazil was built upon the idea of making the World Cup the World’s Cup—transforming it into the most inclusive, engaging and participatory FIFA World Cup flag presentation experience to date.

The objective was to harness the power of soccer to bring together people from different races, places, classes and creeds all leading up to the FIFA World Cup. To meet this objective, Coke’s solution was the Happiness Flag, the world’s largest digitally produced photomosaic flag. The idea for the Happiness Flag was to create a flag to unveil on the pitch that is representative of everybody, regardless of team or country. The brand invited soccer fans across the world to submit pictures of themselves through social media, email and the Happiness Flag website. Brazilian street artist Speto and Argentinian artist Tec designed and painted a beautiful canvas in collaboration with Coca-Cola, and once the canvas was completed, it was digitized, and all of the fan-submitted images were then put together as a massive photomosiac. The photomosaic was later unveiled on the pitch before the opening match in Sao Paulo, Brazil, in front of a global audience.

The Happiness Flag provided an easy way for users to engage—all they had to do was submit their pictures by sharing them on social media. The brand capitalized on the ease and popularity of familiar social channels and hashtags, and already common consumer actions, like selfies. Overall, Coke collected images from 207 different countries around the world, every single country that Coca-Cola is sold in.

After the opening soccer match, the Flag was uploaded to the Happiness Flag website, allowing consumers to zoom in on the Flag, find their pictures and share it again on their social channels, taking the campaign full circle. The physical flag was then leveraged as event décor in subsequent Coca-Cola FIFA World Cup hospitality events. Later, pieces of the flag were actually given back to participating markets after the tournament as a FIFA World Cup souvenir.

Through Facebook, Twitter, Instagram and the Happiness Flag website, the brand was able to leverage technology to reach consumers and gain participation all around the world. The Happiness Flag was comprised of over 3.5 million images and 223,206 fan photos, all voluntarily submitted by consumers. The Flag itself was printed on 192 nylon fabric panels; after 29 straight days of printing, the final product was 32,453 square feet. The Opening Ceremony received about 2.8 billion viewers, meaning that the Happiness Flag unveiling created almost three billion impressions worldwide. And the campaign continued to thrive off of social sharing. After the unveiling, 22,000 posts generated an estimated 703 million impressions online. Coca-Cola’s real time Happiness Flag tweets generated over three million retweets, and the digital flag on the Happiness Flag website generated over 1.5 million views, just during the game. Goal!