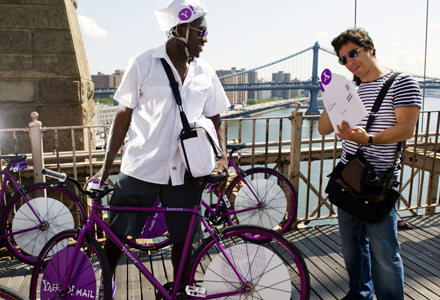 Yahoo! has been taking New Yorkers by surprise this summer with a giant talking mailbox and a fleet of brand ambassadors dressed as mail carriers to promote its updated version of Yahoo! mail, a service meant to connect users in a more personal way through enhanced features like photo sharing and improved spam protection. The stunts started early last month when Yahoo! plopped a giant branded purple talking mailbox on 9th Street and 8th Avenue in Park Slope, Brooklyn, on June 2, and on Stuyvesant Street, in Manhattan on June 3.

The talking mailbox, equipped with a video camera and “staffed” by a comedian, struck up conversations with passersby and then pushed out an oversized white and purple branded envelope with a gift inside. Giveaway items were matched to each person’s interests and included iPads, Yankee tickets, Starbucks cards and doggy treats. Comedian Ryan McDonough, who joked with consumers and kept them around to say and do all sorts of crazy things, was the voice of the mailbox. He was inside a van parked nearby where he watched people’s reactions on a monitor, and then prompted a staffer inside the box to push out the envelopes. The footage was edited down to a viral video that in one weekend garnered 15,000 hits: Click here to watch.

From June 27 to 28, Yahoo! surprised folks again with brand ambassadors dressed as mail carriers roaming the city streets on bicycles, selecting certain people and then announcing, “I have a special Yahoo! Mail delivery for you,” and handing them an envelope with a relevant gift. They’ll be on their bikes again July 7 and 8 in Chicago.

“We wanted to generate awareness of our new features, but how do you market email and make it personal? We decided email is about making a connection and so we took it offline,” Tracy Yates, director of experiential marketing at Yahoo!, told Buzz. “Then we seeded it back online with the viral video.”

The mailbox is touring through August. Yahoo! is taking suggestions on where it should go next on Facebook at facebook.com/yahoomail. Agency: e2 marketing, New York City.