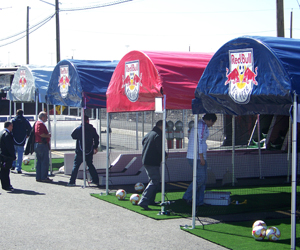 When opening day at the New York Red Bulls Arena soccer stadium in Harrison, NJ rolled around on March 20, fans who flocked (mostly by train) to the game were greeted outside by a brand new all-soccer Fan Zone, designed by Burbank, CA-based Midnight Oil Creative. The team, owned by Austrian energy drink company Red Bull GmbH, has until now played at Giants Stadium at the Meadowlands in New Jersey.

The Zone, which is situated along the walking path from the train station, is designed to entertain fans that arrive early for the game, but because of a lack of parking, can’t experience the traditional tailgate party. On the other side of the Fan Zone is the strategically placed beer garden, stocked up with Bud Light by the stadium’s only sponsor other than Red Bull, Anheuser-Busch. Parked around the Fan Zone are massive trucks that might look more at home in Fallujah than New Jersey, until the backs pop open to reveal dj stations and jocks spinning the hottest tunes.

Inside the modular zone, most of which can be loaded into four road cases to be used at street events around the city, are seven soccer-themed games to draw in the fans, young and old. The two largest areas feature a mini soccer pitch for three-on-three pickup games and a soccer tennis court. Between those two anchors are arcade-like games, including the centerpiece—soccer skee-ball. Fans kick a mini soccer ball up the scoring ramp and try to hit the highest scoring hole. Other games include a soccer speed kick tracked by a radar gun, soccer bowling with giant pins and a beat the goalie game where a plastic goalie swings like a pendulum in front of the goal and blocks balls kicked by frustrated fans.

“We wanted to give our fans that authentic pre-game experience and the Fan Zone is a great way to get people to come down here early and provide a tailgating feeling,” Aaron Squire, director of marketing for the Red Bulls, told Buzz. “Our goal is to reach the 18- to 24-year-old fans who really love the game and fully use our new stadium space to do that.”