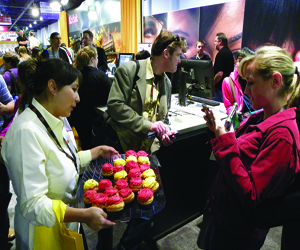 IF YOU WANT TO EXTEND THE LIFE of your event programs through social media but you can’t tell a “retweet” from a “wiki,” you probably need some help. You could let an agency handle it, or, (shudder) automate your posts. But brands like Dunkin’ Donuts and Kodak have decided that the best way to stay on top of the fast moving, ever-evolving social media landscape is to hire a dedicated staff.

David Puner of Dunkin’ Brands and Jennifer Cisney of Eastman Kodak are the online faces of their respective companies and are two of the most experienced in-house online personalities around. Puner, whose official title is communications manager, is better known as @DunkinDonuts on Twitter. He interacts with just over 40,000 followers (built since 2008) and also manages the brand’s Facebook fan page, with just over one million fans. Cisney has been chief blogger for Kodak since 2006 and now, as social media manager for the brand, she supervises four blogs, three Facebook fan pages, two Facebook apps, five international fan pages, 14 Twitter accounts and several Flickr and YouTube channels, all with very specific target-driven focuses.

There are many advantages to having the people that know and love your brand as the face of your social media presence. “It’s so important to have a staffer who manages your social media,” Cisney says. “I understand our culture because I’m a part of it and immersed in it and that’s not something you can take a training class to learn or read in a book.” She says a ghostwriter or agency representative can’t have the same understanding of the brand as a dedicated employee brand ambassador can. “Your own people have the best background to understand your company’s products and image and are therefore better able to be the face of the brand,” she says.

Puner agrees. “Knowing your brand and tone is essential to being an individual voice speaking for a brand,” he says. But that’s not the only key element. Puner says that the person who handles a brand’s social media also has to be trusted to do the right thing for the company, often on the fly and without any editing. “When we first discussed starting our social media presence with Twitter, one of the main things that was stressed was that whoever does this needs to be empowered to speak for Dunkin’ Donuts,” he says. “One ill-considered Facebook update can end all that.”

Developing a well-known and respected social media personality for the brand benefits event marketers when it comes time to draw fans to the booth. At CES in January, Kodak pulled its social media presence into its footprint with the “K Zone,” where Cisney and her staff hung out, tweeted, posted pictures and updates and broadcasted Kodak content throughout the show. Mostly though, they met their fans—something they couldn’t have done with an outside social media expert for hire.

“People came to our booth just to meet me,” Cisney says, with a self-deprecating laugh. “We had this dedicated social media zone with computers and wi-fi and the consumers came to find us.” They came to Kodak’s Cupcake tweetup, too. About 100 attendees showed up and ate free cupcakes while Kodak cashed in on the good vibes.

Bottom line, according to Puner and Cisney: if social media is on your radar, then staffing for it in-house should be in your budget, too. “It’s nice for consumers to know that they’re talking to an individual,” Puner says. “They want to know that [the social media presence] is attached to a person.” EM